In styles, techniques and subject, Western works of art have long been influenced by Japanese art.

"Inspired by Japan," a new exhibition of pieces mined from the Spencer Museum of Art's permanent collection, demonstrates those connections. The show will be on view Friday through June 29 in the museum's White Gallery. 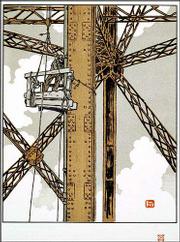 "Ouvrier Plombier dans la Tour" #30 from "36 Views of the Eiffel Tower," a 1902 woodcut by French artist Henri RiviÃre is part of "Inspired by Japan," an exhibit opening Friday at the Spencer Museum of Art. The show, pulled from the museum's permanent collection, will remain on view through June 29.

It groups Northern European and American prints from the 19th and 20th centuries with Japanese color woodcut prints from the Edo period (1600-1868). The latter are generally called ukiyoe, meaning "pictures of the Floating World," and are of leisure-time, pleasurable pursuits. These images -- once unfamiliar in the West -- influenced virtually all of the modernist art movements that disturbed the established canon: impressionism, post-impressionism, art nouveau, and the intense fauvist and expressionist trends of the early 20th century.

The range of artists shown, both in location and chronology, indicates the pervasive and lasting influence Japanese art and design has had on Western imagination and creation.

Cori Sherman North, curatorial assistant in prints and drawings, scoured the collection for the pieces. She was compelled to organize the show after the museum's recent acquisition of several prints that add breadth to an area already strong at the museum. These include Arthur Wesley Dow's four colorways of the same woodcut landscape design and Henri Riviere's three-color lithographs from his series "Thirty-six Views of the Eiffel Tower."

Gifts from museum patrons have added key printmakers, such as Ãdouard Manet and Bertha Jacques, to the list of highly regarded artists in the exhibition, which includes Mary Cassatt and Henri de Toulouse-Lautrec. Prints by Lawrence artists Roger Shimomura and Sally Piller take their place beside earlier tributes to Japanese aesthetics by Prairie Printmakers James Swann and Norma Bassett Hall.

The Japanese color woodcut prints provide visual evidence of the origins of stylistic effects such as flat unmodulated color, dramatic diagonals, cropped and skewed perspectives, and the simplifying or abstracting of nature to basic outline and shape.