WSB 2K3 is the king of hardball this year. Period.

In the world of sports video games where companies throw a few new colorful textures on with a new roster and sell it for $50, it's refreshing to know that Sega had the decency to go farther and create the best baseball game, period. 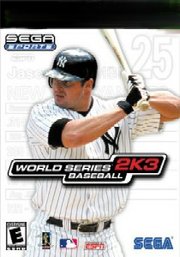 This time of year, we are swamped with several baseball games such as All-Star Baseball, MLB, MVP, High Heat Baseball and others not worth mentioning. We are featuring this review because aside from EA Sports' new pitching system in MVP 2003, World Series Baseball 2K3 from Sega puts all past and present baseball simulations to complete shame.

The gameplay elements mirror real baseball so close it's scary. From wall jumps to diving for the ball to closely refined bat action/reaction physics to defense that can actually throw inaccurately if you suck, it's all in there. Although I must say, the one nagging, possibly nit-picky-type thing that I can point out is that the throws never hit the ground. It makes no sense for even Barry Bonds to be at the 435 track and throw to home, with not even a chance of the ball hitting the ground. Just plain stupid.

The graphics? So close to photo-realism that I almost wet myself. Especially if you are playing the X-box version that supports a true 720p HD in widescreen. The jerseys have wrinkles with shadows! That is the amount of detail that 2K3 boasts. Oh, not to mention near-flawless stadium models.

It even has jersey wrinkles!

The commentary from good 'ol Rex Hudler and heckling are smooth and hilarious, respectively. There are actually "cracks" of the bat versus the normal dinks you can hear in All-Star 2004.

The presentation is your average cut and paste Sportscenter opening. It's getting kind of old at this point.

You want a season? You want trades and deadlines? You have no option but to go with WSB 2K3. The amount of tracking of stats has never been to this depth on any console. But also, for the casual hardball fan, the exhibition mode is incredibly easy to pick up.

Overall, no baseball fan can go wrong picking this up. The visual experience is best on the Xbox; it's not as flashy on the PS2, especially with its framerate issues that pop up at times. But everything else is about equal on both consoles.

WSB 2K3 is the king of hardball this year.

Editor's note: The Gamecube version was initially on the docket, then pushed back to May, then September, then November then gone. Even though Sega had cancelled all sports games for the Gamecube, they were still trying to work the relase of WSB 2K3 as the last effort. Alas, sorry Gamecube owners.