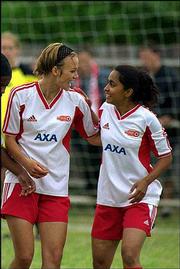 Kiera Knightley, left, and Parminder K. Nagra star in "Bend It Like Beckham."

"Bend It Like Beckham" might as well be called "Write It Just Like My Big Fat Greek Wedding." The movie is the latest in a snowballing line of routine culture-clash comedies that are so light they practically
float off the screen.

But there is one key difference between the pair.

Regardless of the art-house contingent that felt "Greek Wedding" was too much like a TV sitcom (which it literally is now), last year's crowd pleaser still managed to be laugh-out-loud funny. "Beckham"
musters precious few chuckles. It strives to be more heartwarming than funny-bone tingling, and only through the spunk of a great-looking cast does it periodically succeed.

The setup is promising enough.

Appealing newcomer Palminder K. Nagra plays Jess, the youngest daughter of a traditional Indian family living in England. She idolizes Manchester United standout David Beckham - whose ability to curve a ball around defenders serves as inspiration for the film's cryptic title. With her older sister about to be married, Jess' mom and dad (Shaheen Khan and Anupam Kher) want the girl to give up her soccer-playing hobby, go to college and settle down with a nice Indian husband.

While practicing her flashy footwork in a park, Jess is spotted by fellow athlete Jules (Kiera Knightley), who recruits the novice for her semi-pro squad. The fact that Jess keeps the gig a secret from her parents is further complicated by her blossoming romantic relationship with the team's Irish coach, Joe (Jonathan Rhys-Meyers).

Mimicking the zany cross-cultural approach of "My Big Fat Greek Wedding," this wannabe charmer follows an Indian soccer hobbyist (Parminder K. Nagra) who ruffles her traditionally minded family when she joins a semi-pro team. Only the spunk of a great-looking cast keeps this predictable dud from getting a red card.

Will she find happiness with the non-Indian Joe, make peace with her demanding parents and impress the talent scout flying in from America to watch her at the tournament cup?

Are soccer balls round?

For her third feature, writer-director Gurinder Chadha concocts a feel-good effort that is incapable of delivering any surprises. Even those who haven't been exposed to "Greek Wedding" or "Monsoon
Wedding" will be able to predict every action taken by the principal characters. What appears to be the film's lone atypical moment - when a relationship actually takes a mature, realistic turn - is annulled
with a tacked-on airport finale.

Chadha's cinematic execution doesn't fare much better. Within the first 10 minutes, she exceeds the maximum amount of montages that should be allowed by law. "Bend It Like Beckham" is so heavy with the device - a trying-on-clothes montage, a soccer-training montage, a dancing montage - that it often becomes less a film and more of a Mountain Dew commercial.

This isn't the only visual misfire. The soccer sequences are mainly presented in close-ups for a game that is best viewed via wide shots.

Chadha obviously chose this tactic to cover for the fact that her actors aren't genuine athletes. Unlike the surfing flick "Blue Crush," for example, the movie never provides a convincing illusion
that its stars excel at the sport they're supposed to be so passionate about.

"Bend It Like Beckham" picks up momentum as it progresses, when the wedding and the "big game" inevitably fall on the same day. This leads to a hilarious sight gag that involves Jess' imagined
juxtaposition of her family with members of a rival soccer team.

But it's a little too late for a picture that already has numbed the viewer into a state of relaxed indifference. Eventually, this condition gives way to anger during a downright painful end-credits
sequence.

Interspersed with the strained strains of a lip-synched version of "Hot Hot Hot," the cast and crew (and assumedly all the filmmaker's relatives) are shown cracking up in outtakes. Watching people laugh
isn't very entertaining for audience members when they're not privy to any of the jokes that launched the revelry.

It's a fitting coda to this artistic equivalent of cinematic karaoke: the same old song with different singers.