Giving voice to the people 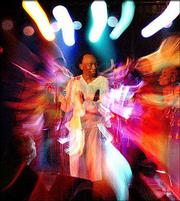 Thomas Mapfumo and The Black Unlimited will perform at Kansas University's first-ever World Music and Cultural Diversity Concert. Mapfumo is a singing legend in his native Zimbabwe.

If ever a musician has earned the right to sing about freedom, it's Thomas Mapfumo.

Known as the "Lion of Zimbabwe" and the "Voice of the Zimbabwean People," the African expatriate has spent the better part of his career fighting the power. He is credited with creating the musical style of "chimurenga" (derived from the Shona word meaning "struggle"), which has served as a political mouthpiece for the oppressed masses of Zimbabwe.

What better person to headline Kansas University's inaugural World Music and Cultural Diversity Concert? Sponsored by KU's ethnomusicology department, the free, day-long event is organized around the theme of "world peace and solidarity."

Few will argue that it's tricky advocating such sentiments when the nation is experiencing the impact of wartime.

"There are a lot of dictators in this world," says Mapfumo. "We know other people like Saddam -- he's not the only one. We have one in Zimbabwe. We'd like to see what the American people think about that man."

That man is Robert Gabriel Mugabe, who seized power from the colonial white regime in 1980. Mapfumo has been an outspoken critic of the dictator and for decades has attempted through his music to make the rest of the world aware of Zimbabwe's ongoing plight.

"Some Americans really care about what is going on in Africa," says Mapfumo from a tour stop in Pittsburgh. "But those at the top, like the president and his entire cabinet, sometimes they forget about what is happening in Africa. They concentrate on things like Afghanistan, Iraq and the Middle East, where the Palestinians and the Israelis are fighting. Maybe they've got most of their interest there. But freedom means freedom. We have to liberate EVERYONE under bondage."

The 57-year-old singer knows quite a lot about the price of such freedom.

In 1977, Mapfumo was thrown in prison for 90 days by the former Rhodesian government because of his lyrical messages of anti-oppression. He was eventually released by agreeing to perform for the white ruling party. Yet at the concert, he stuck with his normal stage set, rendering the same lyrics that got him incarcerated in the first place. (He later told authorities that because he was imprisoned he didn't have time to work up new material.)

"I was one of those people who was one of the oppressed, and I really needed to be part and parcel of that struggle," he recalls. "I thought that was actually fighting for our freedom. I also thought our country was moving in the right direction. We attained our independence in 1980. We elected a black leader. It seemed the situation was going to be really good for black people and for everyone."

But as The Who so eloquently put it: "Meet the new boss/Same as the old boss." The vilified dictator Mugabe took control and has ruled with an iron fist ever since.

"My music played a very important role in liberating that country," he says of the initial victory. "But it's not liberated today ... yet."

In fact, Mapfumo's music is still as in-demand as ever throughout Zimbabwe. (His latest album, "Toi Toi," sold 30,000 copies in its first two days of release). And it's just as subversive. So much so that Mugabe has banned it from being played on the nation's airwaves.

Surprisingly, the vocalist continues to give concerts in his native Zimbabwe, his most recent occurring last Christmas. As dangerous as Mugabe's regime deems Mapfumo, it still seems unable to physically prevent him from performing.

"I think because of the support I command in that country, they're actually afraid to do anything like that," he says. 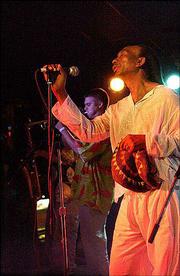 Thomas Mapfumo and the Blacks Unlimited perform some "chimurenga" during a recent tour.

While Mapfumo is free to come and go as he pleases, safety remains a concern. In 2000, the singer relocated his wife, three children and members of his Blacks Unlimited band to Eugene, Ore.

"I love my children to be here in America, because in Oregon it is peaceful," says the singer, whose deep voice is still thick with his Southern African accent. "They go to school. I'm not scared. And I'm actually here for my family."

However, if Mugabe is deposed, the artist promises he will return to Zimbabwe.

"I studied Thomas Mapfumo when I was in school," says Clarence Henry, KU assistant professor of ethnomusicology. "I thought he would be great to have as our first guest artist."

Henry is organizer of the World Music and Cultural Diversity Concert, which in addition to Mapfumo will feature dozens of multicultural performances (Haitian, Spanish, Latin, Native American, Celtic, Asian, etc.) and a special carillon presentation. Now in his second year at KU, Henry says he got the idea while earning his doctorate at the University of California, Los Angeles, where such events were a yearly happening. At the recent urging of some students in his Music of Africa and the Middle East course, the instructor decided to tackle the project.

"I actually picked the theme before the war arrived," he explains. "A lot of people, when you talk about the Middle East, they're kind of afraid of what goes on there, but they don't know anything about the people. First of all, we need to understand people, and if we understand people, that might counter some of the fears that we have. Then the best way to do it is through music."

Henry is particularly proud of booking Mapfumo and the Blacks Unlimited for the concert. The educator explains that the artist, who travels with an 11-piece band, has forged a rich tradition with his chimurenga music.

"It's a fusion style that incorporates nontraditional instruments like the mbira (African thumb piano) with Western music," Henry describes. "But it also has a statement to it as well, because chimurenga music is protest music."

"The chimurenga music, it doesn't mean any particular beat," Mapfumo elaborates. "It's comprised of many African beats. The lyrics within, that is chimurenga. But the music, you come up with a fusion of something from Nigeria, something from Ghana, something from Zimbabwe -- you combine these beats and you come out with really beautiful African music."

Making beautiful African music is something that serves as an analogy for what Mapfumo foresees his homeland capable of achieving. He believes that eventual freedom for the people of Zimbabwe will be difficult but inevitable.

"I have friends all over the world who appreciate what I'm doing," he says. "They encourage me to carry on. I think I'll be deeply involved with the affairs of my own country. Very soon I will be ready to be involved politically. I would like to re-liberate Zimbabwe."

Would he be willing to run for political office?

"Sometime to come, I'm thinking of that," Mapfumo replies. "I don't want to be the president; I just want to work for the people."