God, man clash in 'Mass for the Modern Age'

A confrontation between God and man will boil up in the midst of Saturday's Lawrence Civic Choir concert.

But the clash will occur in musical phrases -- rather than renunciations or prayers of question -- when the 100-plus-voice choir premieres "Mass for the Modern Age" by its accompanist, Geoff Wilcken. 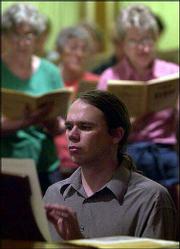 Geoff Wilcken, Lawrence Civic Choir accompanist, practices with the choir Monday at First Baptist Church. The choir will premiere Wilcken's "Mass for the Modern Age" at its spring concert on Saturday.

The work retains the five traditional components of the ordinary mass, but Wilcken's composition tweaks the elements, adding touches meant to explore the confrontation between modern culture and ancient thought.

"It's about the sheer oldness of the mass as a liturgical form kind of faced up against a modern world. It's also about the way that people in this time and throughout the last century or two have been searching, as mankind always has, for meaning and searching for the presence of God and yet in a skeptical age, where a lot of people like to say that this old Christian religion is obsolete," Wilcken said. "We end up even more rootless. In that sense, the piece is kind of a confrontation between God and man in a way, between the Christian faith as it stood for several thousand years and the way our modern society is trying to find meaning and truth without it."

The choir, under the direction of Steve Eubank, will sing the piece to round out the first half of the concert, set for 8 p.m. in the Free State High School auditorium. Also on the program are Scarlatti's "Exultate Deo," Victoria's "Ave Maria" and Verdi's "Stabat Mater." The second half of the evening will include renditions of Knut Nystedt's "Cry Out and Shout," Egiol Hovland's "Saul," Randall Thompson's "The Best of Rooms," and other sacred and secular numbers.

Wilcken, a Minnesota native, studied choral conducting at Kansas University under Simon Carrington, former KU director of choral activities and founder of the internationally acclaimed British vocal ensemble, The King's Singers. He has a bachelor's degree in composition from Iowa State University and a master's degree from KU.

He's been composing since he was 10 years old.

The choir performed his setting of Psalm 90 in the fall of 2001 at the Washington National Cathedral in Washington, D.C. His arrangement of "Home on the Range" has become the standard setting for the choir.

"Mass for the Modern Age" is perhaps his most ambitious piece.

It begins with the Kyrie, a prayer for mercy, then flows into the Gloria, a hymn of praise taken from what the angels said to the shepherds.

"There, I paint a picture of angels actually appearing in response to this cry for help," Wilcken said.

Next would come the Nicene Creed.

"What I've done is not use the Creed there but put in an intermezzo where the string orchestra kind of shows modern man's search for meaning in all different things -- in evolution, in politics, in one ideology after another -- and how these things keep turning up empty," he said.

The fourth element of the mass is the Sanctus, another hymn of praise to God, which comes from the prophet Isaiah's vision of angels. Wilcken chose to set the Bible story from which the Sanctus comes rather than the Sanctus itself. The creed that normally appears in the third segment begins to work itself into the fourth.

Finally, the Agnus Dei, a prayer to Christ for mercy, ties the work together and ends in a request for peace.

Steve Eubank, Topeka, leads the Lawrence Civic Choir during a Monday rehearsal. The choir will premiere a mass by Geoff Wilcken, the group's accompanist, at its spring concert at 8 p.m. Saturday.

"It sort of sums up the interaction between man and God and the machinery of salvation," Wilcken said. "It's a very mysterious 16 measures of music where you couldn't put your finger on where it happened or what happened but which ends in peace and clarity."

Wilcken completed the mass in 2001, and the choir has been rehearsing it since January. A string orchestra will join Wilcken on piano to accompany the performance.

In addition to his role as the choir's accompanist, Wilcken also is music director at Immanuel Lutheran Church and an adjunct professor at Johnson County Community College, where he teaches music appreciation and assists with vocal ensembles.

"He is so incredibly talented," said Ann Carlin Ozegovic, an alto in the choir. "His composition is very contemporary in sound but at the same time, the traditional mass segments remain. He will, once in a while, fill in as director if Steve has a conflict, and I just envy his talent."

Tickets for the choir's spring concert are $10 for the public, $8 for students and seniors, and $5 for children. They may be purchased at the door.