Philadelphia — It may be nearly 200 years old, but the Pennsylvania Academy of the Fine Arts is painting itself in a brand new light.

Buoyed by the success of two recent exhibits and some multimillion-dollar donations of money and artwork, the nation's first art school and museum is in the midst of a $35 million expansion that includes renovating a shuttered former factory for state-of-the-art studios, enlarging its gallery space and retail store and increasing its student body by 25 percent. 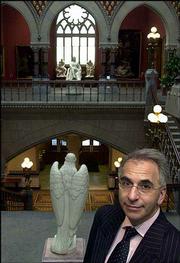 Derek Gillman, director of the Pennsylvania Academy of the Fine Arts, poses near the entry to the historic institution in Philadelphia. Buoyed by the success of two recent exhibits and some multimillion dollar donations of money and artwork, the nation's first art school and museum is in the midst of a $35 million expansion.

PAFA director Derek Gillman called it the most ambitious project the 198-year-old institution has undertaken since the 1976 renovation of its ornate National Historic Landmark museum, designed by Philadelphia architects Frank Furness and George Hewitt.

"As we approach our third century, we still think we are far less well-known than we ought to be," Gillman said. "We aim to get the message out."

The academy developed from a drawing class started in 1791 by scientist and painter Charles Willson Peale, who wanted to establish a gallery and school offering a professional art education -- something the new United States did not have. He and about six dozen backers opened the Pennsylvania Academy in 1805.

Artists who have studied or taught there include painters Mary Cassatt, Thomas Eakins and Maxfield Parrish, architect Louis I. Kahn and filmmaker David Lynch.

But PAFA hasn't traditionally capitalized on its history and pedigree, board chairman Don Caldwell said.

"Starting right after the first World War, we sort of let our light get hidden under a basket," he said. "We saw our collection was underappreciated and the school was underappreciated. There was a perception that perhaps it was private club that maybe seemed old.

"Our goal is to re-emerge as an energetic face on the American art scene."

Key to that new face is the renovation of a former automobile factory-turned-federal building next to the downtown museum, which will create large, modern studios move administrative offices under the same roof as classrooms. The goal is to raise the school's national and international profile.

The renovation also will double the gallery space to display more of the 1,800 paintings in the academy's permanent collection of American art and "show-stopper" exhibits at the same time, and will open a large street-level museum shop and a cafe-restaurant.

That means that when PAFA presents blockbusters like the Parrish retrospective or the "American Sublime" 19th-century landscapes exhibit, it will no longer be forced to put its own collection in storage to make space.

The school also is looking to increase its student population from the current 290 to about 400.

In tough economic times, the academy's plans have stayed in motion because of public and private donations, including a $15 million state matching grant, $5 million from Campbell Soup heiress Dorrance H. Hamilton and 10 works of art from the collection of the late Vivian and Pat Potamkin.

So far, $30 million of the slated $35 million has been raised, Caldwell said.

"It's a great time for us; it's a time of real optimism and excitement," he said. "We're becoming a national player again."