The Legend of Zelda: The Windwaker : Review - Gamecube

Was it worth all the hype? Does the new style suck? Our full review.

Only one word in necessary to sum up Nintendo's flagship game of the year: Wow. Take the perfection that is Legend of Zelda: Ocarina of Time on Nintendo 64, quadruple it, add a few dashes of visual dazzle, a sprig of ingenuity, and BING! Wind Waker. A truly marvelous addition to the growing Gamecube library, and a must have for any gamer (even those Nintendo haters out there). Wind Waker easily transcends any adventure game in terms of visuals, content, and length. 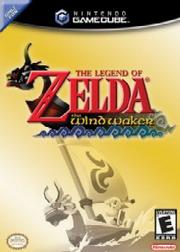 To toon or not to toon? Who cares? This will remain the best game of the year.

When Wind Waker was originally announced for Gamecube, the way the graphics and visuals were presented was basically a high res version of the Ocarina of Time's art style. A few months later new screen shots were released showing Link and his companions in a much more cartoony cel-shaded style, making the graphics look almost hand drawn. Immediately many gamers were up in arms over the change, vowing never to play such a "kiddie" looking game. They were wrong. Sure, the change may not boast the super defined cutting edge technology that many deluded gamers demand, but Wind Waker elevates the platform by making the visual style art.

Any game company can make games that are spiffy with useless lighting effects and eye-dazzling sparkly things, but it takes something special to rise above the usual ho-hum flood of games released year after year. Wind Waker does this. The key to the magic is subtlety. Small details like Link's facial expressions or the flip of his hair in the wind make him all the more endearing to the player. You actually care about Link and his adventure. Storm clouds swirl occasionally as you play, flashes of lightning in the distance warning you of an upcoming downpour. Enemies burst into a blinding spray of light when defeated then slowly fade into a neat smoke effect, all of which maintains the overall feel of the art style.

A big part of the game, obviously, involves the wind. The developers strived to reinforce the element of wind throughout the game, not only in puzzles but also in the environments themselves. Link's clothing flutters in the breeze, dust particles float around, and you must make use of a sailboat to navigate the world map. New items have also been added to allow Link to manipulate the wind to solve puzzles. Link now can float on the wind using a Deku leaf like a parachute or use the Wind Waker Wand to change wind direction. In Ocarina of Time, Link had to traverse a huge world map to get to each of the dungeons in the game. Wind Waker expands on that idea only the world map is much larger and is mostly water. Link must use a sailboat to reach each of the different dungeon levels, and being able to control the wind allows him to do so.

While riding the waves, Link has a variety of side-quests available to him. He can hunt for treasure chests which pay off with extra items and money. He can become a photographer or a merchant trader or even a pirate-fighting swashbuckler of the high seas. Upon completion of these side-quests, Link is rewarded with special items to help him on his primary quest.

Screw playing an instrument, Link now gets to conduct the wind.

Another of Wind Waker's major attractions is its length. In addition to multitudes of side-quests available to Link, the regular gameplay levels offer hours and hours of enemy-blasting, puzzle-solving fun. Usually to complete each task given to him, Link must explore dungeons; searching for items and weapons needed in later battles. Often times each task is further split up into smaller tasks, doubling or tripling the time needed to complete them. Sometimes Link must backtrack to previously visited areas with new items allowing him to reach places he couldn't reach before. Add these elements to the sheer size of each dungeon and you find yourself looking at 40+ hours of terrific gameplay.

The control scheme is taken directly from the N64's Ocarina of Time. Why mess with perfection? Link can still lock onto enemies, allowing him to easily parry or dodge any upcoming attack. New combat elements have been added too. Link has new four and five hit combos he can unleash against any agent of darkness. Some are quicker than others, and some are stronger than others. The player must be able to quickly recognize which enemy they are is facing and choose the best method of dispatching it.

Another big change is the counterstrike. At certain times when Link is attacked, he can use a counterstrike enabling him to get behind the enemy and lay into him with a mighty combo. For some enemies, this is the only way to defeat them, making them puzzles in themselves. At the end of each dungeon, Link must face off against an impressive Boss character. These amazingly designed Bosses are brought to life through epic camera angels, stunning lighting effects, and ingenious behavior routines. Link cannot rely solely on his sword when fighting the Bosses, but must puzzle out each boss's weakness and exploit that weakness to advance past the level.

The bosses are amazing.

The Legend of Zelda: Wind Waker is the first member of the Gamecube library which can truthfully be called a masterpiece. Hours of puzzles and dungeons to explore, combined with miles of beautifully rendered worlds make it stand out head and shoulders above the rest of the cookie cutter games out there. If you didn't have a reason to buy a Gamecube before, you've got one now.

Editor's Take: I agree with Ben that this is easily the best game this year and a defining one for the Gamecube. I would give it about a 94% however, docking it for what I believed to be tedious mandatory sidequests before the final dungeon. It disrupts the fluidity of the fighting. It gives the impression that Nintendo did these merely to tack on several hours of gameplay. Now, if you find yourself doing ALL the sidequests as you go along, then you won't mind at all, but for the shorter attention span, these sidequests would've been better sprinkled among the other dungeons rather than taking a chunk of 6-7 hours out of dungeon-playing to go fish for triforce shards. But that is nitpicking, although Nintendo demands we nitpick for quality. So there they go. Sound off on the art style
here.