It's Wednesday night at the opening round of the KJHK Farmers Ball and local shock rockers Vibralux are backstage at The Bottleneck putting the final touches on their makeup. 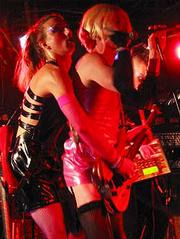 The band has spent weeks preparing for a run at the coveted title, and they're pulling out all the stops for tonight's show: a smoke and light show, a bubble machine and a sponsorship deal with Priscilla's for their garter belts and "skimpy underthingies."

But one element of Vibralux's show will be missing tonight.

In fact, the band's trademark fire-breathing phallus has been out of fashion ever since the Great White disaster. But on this particular night, Vibralux didn't need it to win over the judges and fans, who voted them onto the final round Saturday with overwhelming support.

By advancing, Vibralux joined three other bands that also overcame early handicaps: Hearts to Waste, who somehow won over the KJHK-centered judging panel despite telling the audience to call and request their song on 96. 5 The Buzz; ( blue ), the experimental band with the name that doesn't actually exist in the English lexicon (the proper way to say the band name is to point to something blue); and Kelpie, who bagged the judges' vote, narrowly overcoming uproarious crowd support for competitors Ike Turner Overdrive.

The four bands -- none of which has been together for more than a year and a half -- represent a diverse batch of fresh local talent.

"I think the strength of Farmer's Ball is that it opens the doors to a lot of bands that need some great early exposure," said local music promoter Jacki Becker, who's attended the event since its inception in 1994. "The bands that are reaching greatness don't apply for it because they feel they're past it."

This years' winner will go home with a free day of recording at Black Lodge Studios courtesy of new owners The Get Up Kids. Last years' winner the Hardaways opened for the Anniversary at Day on the Hill, but with that annual event on indefinite hiatus, KJHK was forced to improvise.

"That kind of threw for a loop," said station manager Meredith Vacek. "We thought that free recording time would be the biggest favor we could do for any band right now."

Just getting into the Farmer's Ball is an honor, said KJHK program director Bill Colburn.

"The process of selecting bands for Farmer's Ball has been as controversial as the event itself," Colburn said. "I entered six years in a row and never got in once."

Past winners of the Farmer's Ball also include The Bubble Boys, Starsky, Chebella! and Preferred Villian.

For the bands that didn't make it to Saturday -- the Afternoons, Boskk, Captain Overreact, So Tonight I May Sleep and Ike Turner Overdrive -- the Farmer's Ball still afforded an opportunity to play for an attentive local audience.

Afternoons guitarist Kyle Nanos said he wasn't too concerned with winning: "Whatever dude! We played the Bottleneck!" 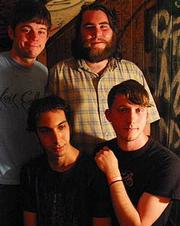