"The Sixth Sense" and "The Usual Suspects" definitely upped the ante for modern plot twists. But these movies were also compelling from start to finish, their jaw-dropping revelations merely icing on the cake.
In the aftermath of those pictures comes a project like "Identity," which sacrifices a fine cast and an atmospheric setting to spring a surprise that derails the momentum. Worse, the frustrating twist isn't unleashed at the conclusion; it happens near the middle.

There is a tide of talent involved with this latest effort from filmmaker James Mangold ("Girl, Interrupted"). It's too bad all their efforts are ultimately sold out at the expense of some mind-game malarkey.

Eleven strangers stranded by a flood at an off-the-highway motel are meticulously picked off by an unknown assailant in this atmospheric thriller from director James Mangold. Frustratingly, the "surprise plot twist" (which comes in the middle rather than end) completely drains the film of its momentum.

In "Identity," 10 strangers come together at an off-the-highway motel (think Bates Motel) in a forsaken part of the American Southwest. Torrential rains have flooded all roads, stranding the travelers along with a fidgety night manager (John Hawkes). Furthermore, the storm has knocked out the phones.

Among the parties is a limo driver named Ed (John Cusack as the nominal hero), who is escorting a fading movie star (Rebecca De Mornay). Others include a cop (Ray Liotta) transferring a prisoner (Jake Busey), a Las Vegas hooker (Amanda Peet) making her way to Florida, a family of three and a newlywed couple.

Almost immediately a grisly murder occurs. As the participants confront their suspicions over "whodunit," various skeletons in each of their respective closets begin to emerge. And it's revealed that each share a major connection of which none are aware.

Meanwhile in a parallel story line, a psychiatrist (Alfred Molina) is lobbying the governor for a stay of execution for his mass-murdering patient.

Mangold and writer Michael Cooney (who previously penned the immortal "Jack Frost 2: Revenge of the Mutant Killer Snowman") conquer half the battle of a thriller by crafting an appropriately eerie setting. "Identity" was shot almost entirely on a vast Los Angeles sound stage because of the challenge of filming in perpetual rain. The artifice of the environment makes it that much more suggestive of a nightmare.
As the mounting sensation of being trapped and helpless affects the group, mundane objects within the motel -- clothes dryers, shower curtains, vending machines, fluorescent lights -- even take on a threatening demeanor.

Then questions start to linger when the body count rises as fast as the water. 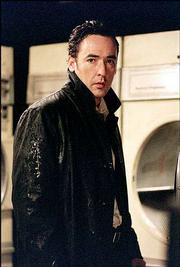 Why is only one officer involved in a hazardous prisoner transfer?

What's the deal with each character's name?

How could corpses disappear?

While clues to the film's punchline may be easy to spot on a second viewing, they are obscured by the numerous red herrings tossed in (the durable "Indian burial ground" ploy, for instance) to disguise the real culprit behind this slasher/psychological thriller.

At one point, Peet's prostitute is so unnerved by the bewildering events she screams into the night, "I give up." It's an amusing moment, since the action echoes the audience's sentiments.


Unfortunately, her phrase takes on another meaning. It also connotes the filmmakers' inability to capitalize on a juicy setup, instead opting to turn the story on its head rather than devising a satisfying linear conclusion. A movie can't expect the viewer to continue caring about its characters once it has established those people aren't tangible components.

"Identity" gives up its own identity in a quest to dazzle the audience.