Washington — Shakespeare's 439th birthday was celebrated Wednesday with the news that American theater companies will take four of his best-known plays on a tour of all 50 states.

The new head of the National Endowment for the Arts, Dana Gioia, called the project, which already involves six touring theater companies, the biggest undertaking since the agency was set up under President Lyndon Johnson.

The endowment is negotiating with a seventh company, the Alabama Shakespeare Festival, to take "Macbeth" to military bases around the country. "Remember that there are 1.4 million Americans in uniform," Gioia said in an interview. "The NEA hasn't done anything special for them and their families in its 38-year history."

One company, Artists Repertory Theatre of Portland, Ore., will play "A Midsummer Night's Dream" with some actors speaking English and others, from the Central Dramatic Company of Vietnam, speaking their own language. The company did Vietnam's first production of the play, using the two languages. U.S. audiences will be helped by translations flashed on a screen.

The NEA calls the Shakespeare tour the biggest in American history. It will visit 100 small and mid-sized communities from Anchorage, Alaska, to West Palm Beach, Fla. To encourage live theater in the smaller locations, the six touring companies will run discussions, workshops and educational programs.

"Othello" will be done by Aquila Theatre Company of New York and The Guthrie Theater of Minneapolis.

The Chicago Shakespeare Theater and the Arkansas Repertory Theatre of Little Rock will share "Romeo and Juliet."

"Richard III" will be done by The Acting Company from New York. 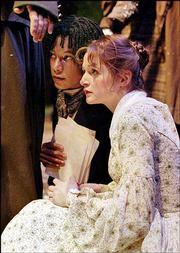 Nina Sosanya as Rosalind, left, and Naomi Frederick as Celia are seen in the British Royal Shakespeare Company presentation of William Shakespeare's "As You Like It," which is playing at the Kennedy Center in Washington. On Wednesday, Shakespeare's 439th birthday, the National Endowment for the Arts announced a 50-state tour of four of the bard's best-known plays.