Secaucus, N.J. — Now that the war is largely over, Lester Holt can get together again with his buddies to jam on loud rock songs in a grungy Manhattan rehearsal space.

A bass player, Holt loves the instrument's subtle part on "Stairway to Heaven." 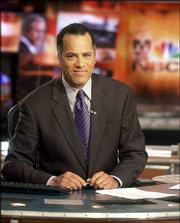 Not quite your image of MSNBC's wartime iron man, eh?

Holt's graying temples and authoritative manner make him so much the quintessential anchorman that it's easy to forget there's a living, breathing human underneath.

Holt's star is on the rise at NBC News, even overshadowing NBC's top anchor-in-waiting, Brian Williams, during the war.

Holt worked regularly as MSNBC's chief war anchor from noon to 6 p.m. Eastern, taking a short break and coming back from 9 p.m. to midnight. On a handful of days, he'd get a few hours of sleep before subbing for Matt Lauer on NBC's "Today" show at 7 a.m.

"You do suspect after a while that he has a twin brother," said Erik Sorenson, MSNBC's general manager.

A New York City radio station even saluted Holt in song. "He's so smooth, he puts me in a trance," WPLJ-FM's Todd Pettengill wrote. "If you want my vote, you should watch Lester Holt."

Sorenson wouldn't put Holt on the air so much without a strong audience response. At MSNBC, Holt caught many eyes with the prime-time war buildup show, "Countdown: Iraq."

"Some anchors are accused of being robotic and detached," Sorenson said. "He seemed to strike the right balance between being empathetic to the situation he was covering and not wallowing in the emotion of it."

Holt, 44, is flattered and somewhat bemused by the attention he's getting now -- as only an "overnight sensation" who has been working for more than two decades can be.

When someone comments on his sense of calm on the air, Holt laughs. "It's fatigue," he said.

But he wasn't about to refuse work during the war.