Los Angeles — They all laughed at Sam Spiegel, a Hollywood producer from Poland, when he made a series of movies in the 1940s with the credit line "Produced by S.P. Eagle."

Spiegel had many a last laugh when he went on to produce the enduring classics "The African Queen," "On the Waterfront," "The Bridge on the River Kwai" and "Lawrence of Arabia," the latter three winning him Academy Awards for best picture. 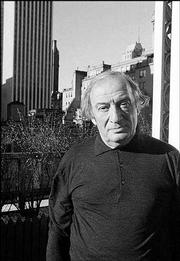 Hollywood Producer Sam Spiegel poses in this December 1971 file photo. English writer Natasha Fraser-Cavassoni, Spiegel's biographer, traces the producer's life from his birth into an educated family in Poland, his emigration to Palestine, then England, and finally to America. Spiegel produced such enduring classics as "The African Queen," "On the Waterfront," "The Bridge on the River Kwai" and "Lawrence of Arabia," the latter three winning him Oscars for best picture.

Yet, those who worked with Spiegel had varying opinions of him.

"There were all kinds of stories about his chicanery and his trickery; I never knew what to believe about him and what not to believe," wrote Elia Kazan, who directed "On the Waterfront" and "The Last Tycoon" for Spiegel. "But I've never been sure that it was important to believe anything definite about him; just take him as a mythological figure."

"He was a monster, a megalomaniac," Gore Vidal said in a recent interview. Vidal wrote "Suddenly, Last Summer" (with Tennessee Williams), worked on other Spiegel films, and once during a spat threatened to throw Spiegel out the third-floor window of a Paris hotel.

John Huston became partners with Spiegel and together they made "The African Queen." The director and Humphrey Bogart claimed they were never paid for their interests in the film. Huston wrote in his autobiography, "'The African Queen' was one of the most successful films I ever made -- and Sam got all the money."

The Spiegel saga is told in the new biography "Sam Spiegel," by English writer Natasha Fraser-Cavassoni.

Fraser-Cavassoni, whose mother is biographer Antonia Fraser, devoted seven years to the book, which she researched and wrote while reporting for Women's Wear Daily and W magazine. As a youngster, she had met Spiegel with her parents and, in 1982, worked as a researcher on his last film, "The Betrayal."

Spiegel was notorious in his late years for escorting young women. Did he ever make a pass at his young assistant? "No," she said, "because at that time he favored flat-chested blondes, and I was definitely neither."

She was asked why Spiegel invented the fictitious S.P. Eagle name.

"It was Joe Kennedy who started this: getting your Jewish names off the screen," she replied. "I believe the version that (studio boss) Darryl Zanuck told Sam, 'Listen, your name is too Jewish. Even my name sounds Jewish, and I'm not.' But Spiegel was already using Eagle as an alias in London in the 1930s, according to Scotland Yard."

The biographer traces Spiegel's life from his birth into an educated family in Poland, his emigration to Palestine, then England, and finally to the United States, courting arrests and establishing a reputation as a deadbeat along the way.

Like most of the founders of the American film industry, Spiegel was an immigrant. "But he was different from those other guys, because he was cultured," Fraser-Cavassoni observed. "He could speak nine languages. He loved opera, the theater. He was very au courant; he took an interest in politics."

His New Year's Eve galas in Beverly Hills attracted stars from Charlie Chaplin to Lucille Ball. At the Cannes Film Festival, he moored his 165-foot-long yacht in the bay and entertained the visiting movie greats with round-the-clock parties. He rented huge suites in the best hotels of Europe, and old and new masters decorated the walls of his London and New York City apartments.

By the late 1970s, though, the stars who had shone at Spiegel's court had died or faded, and the movie business had been taken over by a new breed of tycoons. He died alone in 1985 at 82 in a bathtub in the West Indies. It was New Year's Eve.

Could a Sam Spiegel thrive in today's film world? "It's such a different place, isn't it?" said Fraser-Cavassoni, who is now European editor for Harper's Bazaar in Paris.

"Nobody knows whether the job is going to be there in an hour," she said. "Sam's great appeal was that people liked him. Although Sam was financially questionable, he could still get the show on the road."