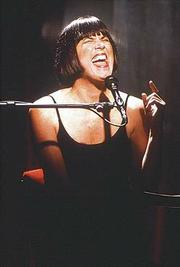 Eve Ensler, creator of the Vagina Monologues, during a show on tour.

Joanie still loves Chachi, but America's favorite little sister has moved into a more outspoken role than the one she once played on "Happy Days."

And though she's no stranger to the big screen -- she got her start in "Daktari" at age 8 and later starred in the 1981 sci-fi thriller "Galaxy of Terror" -- no other gig has been as frightening for Moran as the one that places her on a dark stage with nothing but a microphone to hide behind as she mentions women's "unmentionables" in graphic detail.

Moran is part of the three-woman cast of "The Vagina Monologues," playing Saturday and May 4 at the Lied Center.

Eve Ensler (shown above) wrote the collection of monologues about female genitalia after conducting interviews with a diverse group of more than 200 women from around the world. The original 1996 New York City production won an Obie Award, and Ensler herself starred in the 1999 Off-Broadway run at New York's Westside Theatre. The show closed Off-Broadway in January, but two North American touring companies continue to perform the show.

Moran, who rotates in and out of the cast, will share the Lied Center stage with this tour's two permanent actresses, Starla Benford and Amy J. Carle.

Though Erin Moran came of age on national television -- experiencing adolescence, love and an onscreen marriage to co-star Scott Baio -- her real-life upbringing in the 1960s more closely modeled the modesty of the 1950s era that "Happy Days" portrayed.

"I grew up in a parenting situation where my parents hardly even kissed in front of us. Everything was very secretive and behind closed doors and all that," Moran says from her California home. "And then along with that, my mom never really talked to me about sex and the things that go along with girls and puberty and all that kind of stuff, so I was pretty unaware and ignorant when it came to my own body.

"That's the importance (of doing the show) to me," she continues. "That (secrecy) still goes on. I'm not the only one in this world that it happens to. It still happens to a lot of young girls."

Her natural modesty on the subject of sexuality nearly kept Moran from doing the show.

"I turned it down the first time in Chicago. I thought my agent was kidding. I said 'What?' three times. I said, 'What are you talking about? What are you doing to me?'" Moran recalls.

"After I read the book I said, even more so, I'm not going to do it," Moran says. "But then when I came around. I talked to the producer and owner of the theater in Chicago ... and he said, 'You know, this is a comedy,' and I went 'What? This is a comedy? You're kidding.' And he says, 'No, it is.' And we went over it over the phone and he showed me all the comedic values and places where it is funny, and I went 'Oh, OK.'"

She was also inspired when she found out how many other famous women had performed in the show. Film and TV stars such as Calista Flockhart, Glenn Close, Queen Latifah, Marisa Tomei and Rosie Perez joined Ensler for V-Day 2001, a Madison Square Garden performance of the monologues that sold out 18,000 seats.

This will be her fourth appearance in the touring show (she also did a three-week run at a Chicago theater). The range of women whose proverbial shoes (or in this case, panties) she slips on during the show is broad.

In a monologue called "The Flood," Moran plays an arthritic, 72-year-old woman who had never seen her vagina until the seventh decade of her life. The woman equates her "down there" to a cellar: "I mean, it's part of the house, but you don't see it or think about it."

Moran also plays the woman whose lover "liked to look at it." She learns to love her vagina, which she had previously loathed, after meeting a connoisseur of the female nether region.

And then there's the sex worker who only "works" with women. The monologue has Moran extemporizing on how she perfected her moaning technique.

"I don't REALLY relate to any of them. I don't dress mine up, and it doesn't talk," she says, chuckling quietly. "I'm really just doing (the show) because the privilege came along."

But then she rethinks: "All of them really do have a similarity to my life," especially the old woman and the woman whose lover liked to look at it because they both started out uneasy with their sexuality but were able to reach a comfort zone.

Moran, who has been divorced once, is now married to a man who makes her feel "very comfortable."

There are parts of "The Vagina Monologues" script that don't have quite the same comforting effect -- for Moran or her audiences.

She recalls one audience member who had a hard time at a show in Atlanta.

"They just couldn't handle it. In Atlanta, Georgia -- and this is something I've never experienced, though the other girls had -- someone had a hard time with the Bosnia monologue. They couldn't handle it and passed out," Moran says. "It's funny because when I read the book, I had to put it down during that part."

The disturbed viewer returned to the audience, but only after the Bosnia segment was over. (The monologue, called "My Vagina Was My Village," is based on a Bosnian woman's story of being raped during war in Yugoslavia).

Despite its most disturbing moments, Moran continues to have fun with the production.

And she still gets shouts of "Joanie!" and "Where's Chachi" from some audiences.