New museum 'dissolves into the sky'

Tacoma, Wash. — Architect Antoine Predock had a complaint about the weather during a recent visit to this Pacific Northwest city's new art museum: It wasn't raining -- again.

"I don't even carry a raincoat up here any more," Predock, who designed the Tacoma Art Museum's new 50,000-square-foot home, said in mock exasperation.

This is the view from the education wing of the new Tacoma Art Museum in Tacoma, Wash. Architect Antoine Predock uses his design of the new museum to show off downtown Tacoma, Wash., and Mount Rainier, background left.

Rain would show off the building's stainless-steel exterior, which gleams a muted silver. The material is intended to complement Tacoma's gritty industrial core and the region's famously cloudy skies.

The building itself frames Mount Rainier, which Predock prefers to call by its Indian name, Tahoma, citing "the poetic power of the word." Like the mountain, which appears and fades depending on conditions, Predock envisions the new museum as a building "that dissolves into the sky."

The new museum -- the latest step in blue-collar Tacoma's renaissance -- opens to the public with a 24-hour party that begins Saturday evening and carries on until dusk May 4 with two rock bands, yoga at dawn, gospel music, jazz and a downtown bed race.

Glass master Dale Chihuly, a Tacoma native, celebrates the opening in the museum's largest gallery -- 4,200 square feet -- with a vivid, tropical garden of glass called "Mille Fiore," his wild take on the Italian glass tradition of "a thousand flowers." Elements of the site-specific work range from 6 inches to 25 feet tall.

The spacious galleries have windows in surprising places, all keyed to views of Tacoma's "industrial landscape" -- a glimpse of the nearby marina, a peek at the mountain, the fortresslike underpinnings of the freeway and a nearby bridge.

"It's so essential to me to have these connections to place," said Predock.

The $22 million facility should be the last stop for the institution founded in 1935 in a spare room at the University of Puget Sound. It has occupied several downtown spaces since -- in the old city jail, a storefront between a Bible store and a liquor store, and, since 1971, a dignified but cramped former bank building. 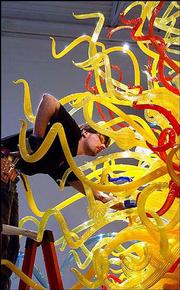 David Gackenbach, an installer with Chihuly Studios, helps assemble a giant glass sculpture that is part of Dale Chihuly's "Mille Fiori," an exhibition created for the new Tacoma Art Museum. The $22 million museum opens May 3.

The rooms are subtly irregular due to their spiral array and the building's sloping roof. They're united by white walls and a muted-black cement pathway.

The museum's four galleries are wrapped around a courtyard, surrounded by mirrored two-way glass and open to the sky -- a storeroom of natural light that spills into the galleries spiraling around it.

On the floor of the courtyard is a heaving sea of stone, with a cresting 7-foot wave at the corner marking the entrance to the galleries, a hushed counterpoint to another permanent installation: a wall of Chihuly glass.

Seattle stone artisan Richard Rhodes designed the courtyard in Chinese granite that was hand-chiseled five centuries ago into 24-inch-square blocks for a road. Over the past 500 years, the crystalline surface has been worn to a soft patina by animal and human traffic in the Pearl River Delta in southern China.

"They have this fantastic texture ... you get almost a sheen to the stone from the wear," Rhodes said.

Each piece was trimmed for the sculpture using a computer-generated paper template. The work was preassembled alongside a rice paddy in China, and then numbered, color-coded by section and packed up for shipping -- a blend of 16th-century stone, 18th-century handcraftsmanship and 21st-century information technology, Rhodes noted.

A visitor walking through the galleries -- "up to the mountain," as Upp put it -- winds around the courtyard to a second-floor concourse above the lobby, with Mount Rainier on the left. To the right, on the street side, are glass-walled classrooms, a resource center and work spaces.