Prisoners see art as an escape

Findlay, Ohio — Philip Sugden remembers shuffling through the cellblock after teaching a prison art class when someone grabbed his arm.

It was one of his students. 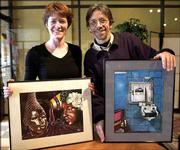 "Do you realize how much this means to us," convicted rapist Edwin Thoma told Sugden, tears streaming down Thoma's face.

Thoma's pastel painting of row houses and his intricate ink pen drawings of sailing ships are part of an exhibition called "Imagination Unlocked."

A series of educational workshops on art and writing taught by volunteers at the Lima Correctional Institution inspired the touring display of prison art that originally was displayed inside the medium-security prison last year for visitors, employees and inmates.

Since then, the show has traveled to coffee houses and libraries in Ohio. Next month, it is to be at the Wood County Historical Center and Museum in Bowling Green.

Nearly all the paintings are bright, using watercolors, oils, colored pencil and ink. There are landscapes of mountains and sunsets, and only a few dark images.

"This is mental survival for them," said Sugden, an art professor at the University of Findlay in Ohio. "It completely pulls them out of the prison. It's an important part of their survival in prison."

Sudgen has taught art classes at the prison halfway between Dayton and Toledo for about 10 years. But cuts in state funding eliminated those classes, he said.

He and Findlay high school art teacher Valerie Devitt came up with the idea to teach classes on writing and painting at the prison two years ago.

"It really helps them establish a sense of self," Sugden said. "For some, it's the first time they've completed anything in their lives."

Only one artist refused to help, telling Sugden that prisons should be for punishment and not art classes.

"I'm sure there's plenty of people around like that," Sugden said. "But if people are upset, they're not saying anything."

Crime victims advocate David Voth said he has not heard any complaints.

"It's a great way to remind people there are talents in there," said Voth, who is executive director of Crime Victim Services in Lima. "It may have the effect of reminding the public that 99 percent of inmates will get out, and we need to support their rehabilitation."

Voth said he has no problem with prison art displays as long as inmates don't use them to make statements about their innocence.

Among the most striking works in the exhibition are statements on prison life.

"It Wasn't Just a Tree" shows a tree with bright yellow leaves inside a prison yard against the backdrop of the red, brick prison walls and the iron bars over windows.

The tree was chopped down on a summer day two years ago, artist Larry Cameron explains in a written description of his painting.

"It was a shock that sunny afternoon as they cut down our tree," wrote Cameron, who is serving a 16-year sentence for sexual battery. "But they won't carry away our hopes, dreams, and imaginations as easily as they did that splendid tree."

Other short essays by the prisoners that accompany the paintings offer some insights.

"When you are behind the wall, as we are, art is a way for us to just disappear into our minds and come up with something beautiful," wrote inmate James Matthews, who is serving six years for rape. "That is what art means to me -- to find yourself and lose yourself at the same time."

The reality of prison life comes through in "A 10,950 Day View." It is a scene Willie Hightower sees every day -- a bright, blue cinder block wall, a white porcelain sink and a calendar.

Hightower, 49, is serving a life sentence for murder. He has been in prison since age 21, and he said art is his only escape.

"Finding you really have talent is really something special," Hightower wrote. "Finding you may never be able to show others is tragic."

Devitt said the works have been well received by the public and the inmates have been pleased to see their work recognized within the prison community.

"I don't think they ever saw their art work in frames before," Devitt said. "I wish they could hear more about what the public response has been."

Lynne Calvelage, part owner of Coffee Amici in Findlay, a coffee shop that displayed the paintings in March, said the exhibit changed her perceptions.

"You realize they're people with feelings, and you look at them in a different way," Calvelage said. "I wonder what other images they're holding in their heads. What else is in there?"