Los Angeles — The audience appetite for reality television could be tested by a planned cable channel that will offer a diet of all reality, all the time.

Reality Central, scheduled to debut in early 2004, is being developed by Larry Namer, co-founder of E! Entertainment Television, and Blake Mycoskie, a businessman who was a reality show contestant. 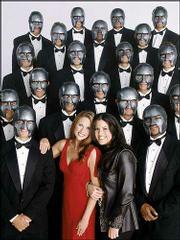 Monica Lewinsky, center right, and contestant Hayley are shown with male suitors for the new reality series "Mr. Personality." The audience appetite for reality television could be tested by a planned cable channel that will offer a diet of all reality, all the time.

Namer and Mycoskie contend that reality TV has proved its staying power and can attract enough viewers for a niche channel.

"Reality is now a genre, just like any other genre," Namer said in an interview last week. The venture was to be announced today.

"Right now it has a cultlike following, and we're not saying that's going to exist forever," he said. "But I think this type of programming will remain a genre just by the basic economics of it and what it does for a network."

Networks have found success with such hit series as Fox's "American Idol" and CBS' "Survivor." The shows are especially popular among the young adult viewers favored by advertisers.

But the rush to capitalize on the trend, sometimes unsuccessfully (ABC's "Are You Hot?"), has raised questions about the genre's future.

Reality pioneer Bruce Nash, whose projects include Fox's current "Mr. Personality" with Monica Lewinsky, believes the genre is durable and will survive the current glut and bad shows. He's less certain about how an all-reality channel will fare.

"It's an interesting idea. Whether it will work remains to be seen," Nash said. "I produce 120 hours of reality TV, but if I had to watch it all day, I'd go nuts."

However, he added: "Everyone is so niche, why not? Why not an all-reality cable channel?"

Reruns of domestic and imported series will represent half of Reality Central's programming. The rest will be behind-the-scenes looks at the shows and contestants, "all those things that feed the fan appetite," Namer said.

The channel plans to enhance the series repeats with commentary from contestants, such as Richard Hatch offering details on his winning "Survivor" strategy.

Reality stars, including Hatch, fellow "Survivor" contestant Colby Donaldson and Trista Rehn and Ryan Sutter of "The Bachelorette," have signed on with the channel to promote it.

Prize winners from various shows were the first investors in the channel that has incurred about $1 million in startup costs so far, said Namer and Mycoskie, who was a runner-up on CBS' "The Amazing Race." The investors were not identified.

About $25 million will be required to get the channel up and running through its first year, the partners said.

Reality Central would join the ranks of other cable networks that target specific audiences with mostly reruns, such as ESPN Classic and SoapNet.

It doesn't take many viewers for such channels to work. The business model for Reality Central is based on a 0.2 rating, or roughly 200,000 homes. Shows that score a 0.5 rating, about a half-million homes, "are big hits for cable," Namer said.

The channel will produce only one reality show: It will detail the development and launch of Reality Central, which is being documented on digital video.

"So the network itself is a reality show," Namer said.

Although there will be original programming about reality TV, the lack of fresh series was met with some skepticism.

Reality is the "kind of genre that has a way of burning itself out," said industry analyst Larry Gerbrandt of Kagan World Media. When reality falls out of favor with networks, he said, Reality Central will have to start creating its own series.

Discussions are under way with networks but no deals for specific shows have been made, said Namer, Reality Central's president and chief executive officer, and Mycoskie, its chairman.