More characters, more weapons, more vehicles, more kinds of enemies, more multiplayer options and more Master Chief. That is what Bungie Studios is promising for Halo 2. So much so that Jason Jones, head of Bungie, stated "Halo 2 is a lot like Halo 1, only it's Halo 1 on fire, going 130 miles per hour through a hospital zone, being chased by helicopters and ninjas. And the ninjas are all on fire, too" in the original press release.

The statement makes perfect sense, considering that what gamers cried out for was more of the same, but with the bar raised. Halo set so many new benchmarks for gameplay that it would be difficult to come up with even more original ideas. That being said, some features that were absent from Halo will be in Halo 2. 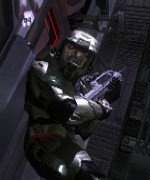 The expectations are high. Very high.

There will be destructible environments a la the Red Faction series that popularized this feature. There will also be strong support for Xbox Live, so you can play multiplayer with gamers all over the world. Bungie says that Halo 2 will be the definitive Xbox live game with all of the modes they have secretly planned. Bungie also will incorporate better artificial intelligence (how can it get better?!) more types of Covenant enemies and more stealth scenarios (shooting out lights to not be seen, etc.)

Halo 2 will run on a completely different graphic engine than Halo. Halo was designed first for a Mac, then was ported and optimized for the Xbox when Microsoft bought Bungie. This time around, the graphic engine was built specifically for the Xbox from the ground up. Bungie's graphic engineering team further states "Our code squeezes every drop of power out of the Xbox. We're doing dynamic lighting and shadows, per-pixel everything, rendering gigantic, lush environments. The graphical features we're using are so advanced we don't even have buzzwords for them yet." Like the first Halo, you can expect sky-high production values.

Anti-Microsofters, eat your heart out. These graphics aren't pre-rendered.

Halo's sound team won so many awards for the beautifully intense orchestration that provided a perfect sci-fi background. It was so good that the soundtrack came out and sold nearly 1,000,000 copies. The same team has been commissioned again to work vigorously on Halo 2. Don't expect the same recordings of the same tunes. Most of the melodies will be fresh.

Bungie isn't letting many details out yet. But they promise many twists that no one will see coming until it unfolds in the game. What we do know is that there is another ring planet, the covenant are attacking Earth and Cortana, the AI construct, is still in the game to aid Master Chief. That's good enough for me.

The Importance of Halo 2

The casual gamer might say that the Xbox is the "Halo Machine." But even though Microsoft managed to put some really good games out other than Halo, the course of the Xbox's future will be determined by how good Halo 2 is when it comes out later next year. (Editor's note: Although many sites say that Halo 2 is coming out in June of '04, Bungie Studios says they are all wrong, and Halo 2 will come out "when it's done.") I say this only because the outlook for Xbox software this year is dismal, especially if the Ninja Gaiden revival flops.

Make a game better than Halo 1? May the Force be with you.

Gimme a Taste of Halo 2

Download the trailer here. Keep in mind that the graphics are not pre-rendered, this is the actual in-game graphics engine.