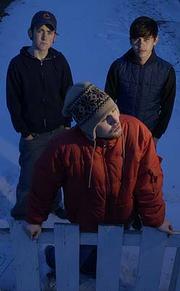 In Celtic mythology, the Kelpie is depicted as a treacherous river spirit who assumes the form of a black stallion to lure unsuspecting travelers to their doom. If the traveler should be so foolish to mount the wild stallion, the Kelpie promptly drowns the unlucky victim and dines on their flesh.

It's an apt metaphor to describe local band Kelpie, who dined on the competition at KJHK's Farmer's Ball last Saturday. Like the cunning river stallion, the band delights in luring its audience with beauty only to shock them by changing shape.

"If you're gonna repeat something -- perhaps this is the reason that I don't do it -- you gotta have a great melody," said guitarist and lyricist Casey Burge. "The Beatles repeat everything, man, like over and over again, but the parts are so good that they're able to pull it off."

"I think the strange changes come out because in some songs I'm playing with a poem that I've written," Burge said. "I personally dissect everything that's going on when I listen to music."

Kelpie formed in November when former Diversion 4.0 bandmates Burge and Nate Harold teamed with drummer John Momberg. Since the trio's first show at Hashinger Hall, it has gigged regularly at house parties and local venues such as The Bottleneck. Winning Farmer's Ball gave the act some welcome local exposure as well as a free day of recording at Black Lodge Recording in Eudora.

"I definitely like the attention, but I also take it with a grain of salt," Momberg said. "I've been playing in bands too long to make a big deal of it."

The group has recorded nine songs in various home studio arrangements and will contribute a few tunes to an upcoming compilation by local label Archer Avenue. The label, owned and operated by the members of Getaway Driver, also is host to three Texas bands: Little Compass, My Spacecoaster and Tiebreaker.

"We knew so many bands that we liked that had no way of getting their music out to other areas," Harold said. "It's mostly a way to consolidate our resources."

In lieu of an album, Kelpie is passing out free demos to friends and fans and offering the song "Feng Huang" on MP3.com and on this site (here).

The song tells the story of a person who tries to sing with the Feng Huang, a mythological three-legged phoenix whose melody is said to be the basis for the five-note Chinese scale. The bird only appears in times of prosperity; perhaps an indication that Kelpie's time has come?

Hey its shaundel, what have you been up to? Not much here. you look great! You got tattoos, that's awesome. It might suprise you but so do I. I only have one so far, but I want more. I would love to hear from you. if you want to write me one of my email addresses is themeats22@yahoo.com. the one that adam picked for me a long time ago. Take care