New York — Is Jennifer Lopez the modern version of the Greek goddess?

She sure looked the part at the 2001 Academy Awards when she wore that sheer, draped, one-shoulder Chanel gown. 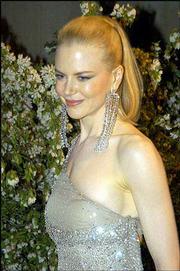 Academy Award winner Nicole Kidman arrives at a gala for the Costume Institute at the Metropolitan Museum of Art in New York. The museum is opening an exhibit Thursday, "Goddess," which traces the history of Greek gowns.

The memorable dress designed by Karl Lagerfeld is among the 120 outfits that trace the influence of Aphrodite, Hera and Athena on contemporary fashion at The Metropolitan Museum of Art's Costume Institute exhibit, "Goddess," which opens Thursday.

Goddess gowns also are often depicted as one-shouldered, done in ancient times as a sign of the goddesses' mythic identity, which is why the Greeks are associated with asymmetrical necklines. Regular Greeks, though, didn't wear this style.

There are three silhouettes upon which all ancient Greek clothes are based: the chiton, a chemiselike shift made from two rectangles of fabric either pinned or sewn together at the shoulders; the peplos, a single piece of cloth wrapped like a cylinder and cuffed along the top with two brooch pins that attach the front to the back -- it sometimes features a "girdle," a fabric sash that pulls the fabric closer to the body; and the himation, the rectangular cloak that influenced the later Hellenic wrap dresses.

Two-and-a-half millennia ago, the himation was a modest garment (although it was not unlike the more shapely Roman toga), but the basic shape can be seen in more provocative garments designed by Dolce & Gabbana, Versace and Ralph Lauren -- all of whom are represented in "Goddess," which runs through Aug. 3.

"Respectable Greek women would be more similar to the dress of Muslims today with most of their bodies covered up," curator Harold Koda said.

One of the primary reasons modest Greek gowns evolved into super-sexy dresses worthy of 21st-century screen sirens is the lack of any real prototypes, according to Koda.

"There are no classical garments that have survived. It's not like in Egypt where you'd find a body still clothed," he said.

Instead, Western fashion designers and dressmakers over the past 600 years have found themselves using ancient sculptures for Greek inspiration, not actual clothes.

The sculptors tried to make their subjects a more perfect version of the real-life models. Taking liberty with the "clothes" was a way to show off the enhanced shapes, Koda explained. Artists also added drapery to the garments in an effort to make the subjects seem more animated.

In later centuries, those sculptures inspired painters, who put that idealized vision of Greek goddesses on canvas.

"All our ideas of classic dress is seen through art. The details like the tight pleats has to do with artistic representation from a statue. Classicism went from cloth to stone to painting to cloth," Koda said.