Only clown in town turns frowns upside down 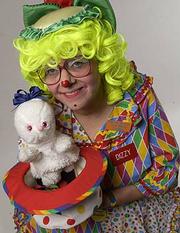 Rita Winter, aka Dizzy, might be the only clown in town, but her shtick is nowhere near gloomy.

And, for the most part, people who encounter her in her brightly striped and polka dotted costumes, dayglow Converse hightops and face painted with a Rudolph red nose and permanent grin at least crack a smile.

"People honk. They wave," says the 50-year-old Winter. "It gives them a tiny diversion from whatever's going on."

From 8 to 5 weekdays, Winter works in quality assurance for the Department of Social and Rehabilitation Services -- a pretty serious job for someone who spends her spare time clownin' around.

Not that clowning is less than professional. In fact, Winter belongs to Clowns of America International and the World Clown Assn. The organizations have their own codes of ethics, group insurance policies and even continuing education. Winter's the only Lawrence member.

That's why she's taken it upon herself to educate Lawrence residents about clowning during International Clown Week, which began Friday and ends Thursday. Last Thursday morning, she met with Douglas County Commissioners, who signed a Clown Week proclamation and received their very own red plastic noses. She'll bestow the same honor on City Commissioners Friday morning.

Today, she'll be clowning at LMH South during their community picnic, from noon to 3 p.m.

Winter hopes to "promote clowning and make the community aware of charitable activities clowns do, but also recruit" new clowns, she says. "It's so much fun. It would be so nice to have an alley here."

For now, Winter belongs to a clown alley in Kansas City, Mo. (The term alley comes from the old circus days, when clowns would travel with the circus and lodge in rows of tents.)

She picked up clowning quite by accident eight years ago while living in Great Bend.

Rita Winter, aka Dizzy the Clown, is Lawrence's only member of Clowns of America International and the World Clown Assn. This week is International Clown Week, and Dizzy is planning events to educate the community about clowning around. She's pictured here with Dottie, her rabbit in a hat that she uses to entertain children.

She created a doll named Marigold and a book that told Marigold's story for a fund-raiser at the community's zoo. Somewhere along the way, she realized she had agreed to portray Marigold.

"I'd never done anything like that before or even thought about doing it," she recalls. But she dressed up like the doll and put on Halloween makeup. "And I loved it. It was so much fun."

After that, she moved to Texas, a state where clowning is pretty popular, she says, and decided it was her calling. She and her daughter starting sifting through a list of adjectives, searching for the perfect name.

Winter's been pursuing clowning seriously for the past three years. She's attended conferences and workshops.

She even went to clown camp.

She loved it, but her daughter wasn't a big fan.

"My daughter's really frightened of clowns," Winters says. In an attempt to overcome her fear, she became a clown herself and went to clown camp with her mom.

'To make us smile'

Clowns give lots of people the creeps, but Winter has only encountered two who actually had coulrophobia (fear of clowns) and took off in the opposite direction when they saw her.

She tries to be conscious of the effect Dizzy might have on people. When parents call her about birthday parties, she asks if their child is scared of Santa Claus or the Easter Bunny.

"If they are, then you don't want me," she tells them.

Winter also does her best to follow the clowning code, applying her makeup in a professional manner and staying in character when she's in costume. She's also careful never to make audience members the butt of her jokes.

"Sometimes, with their permission, you can make a parent look silly," she says. Her favorite trick in that vein is to pull a mouth coil (one of those seemingly never-ending tissue strings) out of a parent's ear while scolding, "You need to clean your ears."

"Kids love that," she says.

They also love Dottie, Dizzy's rabbit in a hat. The white bunny lives in a top hat, is very shy and will only whisper in Dizzy's ear. Winter has created a whole life story for Dottie and outfitted her with items like a tiny inflatable swimming pool and a backpack and baseball cap for school.

Winter has a few other personalities up her sleeve. She plays Mrs. Santa Claus, a Fairy Godmother, J.J. the young tomboy clown and JoBe Joy, a Christian clown. On Valentine's Day, the Kansas University men's basketball team hired her to perform a singing telegram for then-KU coach Roy Williams. She serenaded him with "I Will Follow Him" and stuck a red nose on his face.

In 2001, family issues and the Sept. 11 terrorist attacks nearly took Winter's heart out of clowning, but a commandment from her young granddaughter kept her going:

"Mimi, you can give up clowning when you get old. Right now, everyone's sad and we need clowns to make us smile."