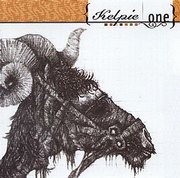 On Kelpie's first album, one is and is not the magic number.

Because the band resists building every song on One around only one hook, Kelpie establishes for itself a sound characterized by rhythmic shifts and meandering melodies. The consistently inconsistent song structures transform Kelpie into an adventurous group jamming through its set list without interruptions from roadies tuning instruments. But with so many changes, One's songs don't always sound distinct. They sometimes blend into one extended work.

Throughout the nine-song album, John Momberg's drums click more than they crash. Nathan Harold's bass bubbles, and the strings sometimes buzz on the fret board. Casey Burge's half-distorted guitar rings, and his double-tracked vocals resemble those of Chris Conley of Vagrant Records emo band Saves the Day. The trio uses rests as well as increasingly rare quarter, half and whole notes in songs that adhere to loose, mid-tempo grooves perfect for casual head bobbing.

"To Feng Huang" stands out while representing the overall sound of the album. For the first minute and a half, Kelpie adds a poppy feel to classic Sunny Day Real Estate-style arpeggios and juxtaposes the music with witty spiritual lyrics. "I am Jesus, / and as Jesus, / I was born by a miracle," Burge sings with tongue-in-cheek-style conviction. After the first section, the music drops out for about five seconds. Burge and his guitar rise again to confront Lucifer, either the fallen angel or a wicked woman. "Dad says you're dangerous. / One angel you just can't trust. / Affection I can't touch," he sings. Harold and Momberg's instruments rejoin Burge for a sing-along of the words "Oh horror!" in the final segment.

In three minutes of music, "To Feng Huang" contains a trinity of movements. Throughout One, Kelpie changes musical directions and rhythms mid-song. In album opener "To the Llama," they tease the listener with several separate shifts and riffs. "To My Prisoners" features muted strumming, a louder rock stomp, softer noodling, a crescendo, a heavy strum-and-mute pattern and a false ending complete with instruments fading back into the speakers a la Led Zeppelin's "Thank You." And flirty acoustic guitar picking tiptoes into "Engaged" for a few seconds before the plugged-in instruments and drums jab the air like Wayne Coyne's fist at a Lips show.

Until the second half of the record, Kelpie's music sounds like a person channel-surfing. The couch potato with the remote control can't choose a program, and Kelpie's tunes don't settle on one chord progression, riff or steady rhythm. But "A Lesson in Surrender," "Apologia" and "Brown Skin" break the almost monotonous momentum of One. The songs sound different because new instruments -- a violin in "A Lesson in Surrender" and acoustic guitars in "Apologia" and "Brown Skin" -- creep into the mix. The tracks are so concise and energetic they sound like they were recorded during separate sessions.

Like these three tracks, each song's lyrics prevent One from becoming one 30-minute song. Besides Jesus and Lucifer, Burge sings about fellow musicians' frustrations, veins filled with embalming fluid and writing a kiss-off in a letter to a former lover.

Ultimately, one might be the magic number for Kelpie. Without a single repetitive riff or catchy chorus, nothing on the album can stand alone as a strong A-side. One, then, becomes an album better taken as a whole.