'Gigli' bomb should cause little fallout

Los Angeles — The mob romp "Gigli" ended up a Hollywood disaster movie, yet stars Ben Affleck and Jennifer Lopez and most of their collaborators should emerge unscathed.

Losing big, it seems, is just part of the game called show business.

Hollywood heads generally don't roll over a single flop, even a turkey such as "Gigli." It had a dismal opening-weekend gross of $3.8 million -- a pittance for a high-profile movie with a $54 million price tag.

Revolution Studios, which made "Gigli," and Sony Pictures, which distributed it, will end up losing about $30 million, while real-life sweethearts Affleck and Lopez lose a little face amid the movie's lousy reviews ("Unwatchable," according to Christy Lemire of The Associated Press).

"Nobody loses their job as a general proposition over one bomb," said Kim Masters, a film columnist for Esquire magazine.

If anyone pays the price it likely will be writer-director Martin Brest, who also served as co-producer and had the last word on the movie's final cut.

That's a rarity in tag-team Hollywood, where movies often have gaggles of credited producers, writers and executive producers, whose sheer numbers help insulate them from any blame.

Brest, who did not return phone calls seeking comment, is a choosy director who has made just five movies since his Hollywood debut with George Burns' 1979 picture "Going in Style."

He scored a huge hit with 1984's "Beverly Hills Cop," then had solid critical and commercial results from "Midnight Run" and "Scent of a Woman" before stumbling with the 1998 big-budget dud "Meet Joe Black" -- his last movie before "Gigli." 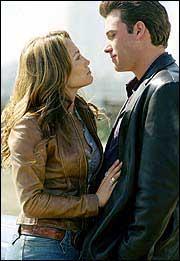 Jennifer Lopez and Ben Affleck star in a scene from the film "Gigli." The mob romp quickly turned into a bona fide Hollywood disaster -- yet its stars Affleck, Lopez and most of their collaborators should emerge unscathed.

"The one person who may have a hard time with their next project would be Martin Brest," said Chris Gardner, who covers the movie business for the trade paper The Hollywood Reporter. "A lot of it at this point will fall on his shoulders."

Despite two misfires in a row, Brest's phone might keep ringing. A hit like "Beverly Hills Cop" has a long shelf life in Hollywood.

"People tend to fail upward in this business," said David Miller, an entertainment analyst with Sanders Morris Harris. "Half the game in this town, in the movie business, is not creating a hit film. It's getting a film made in the first place."

It generally takes a string of failures before studios and production companies hunt for scapegoats. That often winds up being the marketing and publicity people charged with selling movies to audiences. Last year, MGM replaced key marketing executives after flopping with "Windtalkers," "Hart's War" and "Rollerball."

Studios generally roll with the punches, hoping hits offset flops. Sony had a monster 2002, paced by the blockbuster "Spider-Man."

"Gigli" is a "bump in the road. It's part of the business. Not everything can work," said Revolution partner Tom Sherak. "Could I sit here and blame somebody? I can, but I won't do that, because there's nobody to blame. We truly did everything we could to make the picture work."