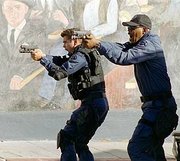 The one vivid memory I have about the ABC show "S.W.A.T." was its theme song. The groovy, brass-driven instrumental became a pre-disco hit in 1975, joining the era's "Barney Miller" and "The Rockford Files" as the hippest of TV's title compositions.

After 28 years, that's the only thing I recall about this short-lived police drama.

Similarly, it will be a surprise if 28 days later I remember anything about the movie "S.W.A.T."

Despite being well-cast and efficiently staged, the $70 million blockbuster offers virtually nothing to set it apart from dozens of other cops vs. bad guys flicks. Like a bullet shot from a rifle, this is one shiny, noisy and mechanical affair.

It's a shame because the cast alone justifies the picture's existence.

Individually, Samuel L. Jackson, Colin Farrell and especially Michelle Rodriguez project enough attitude to fill up any screen. These are edgy performers who all have a track record for being able to bring intensity to roles, even when stuck with characters that can each be summed up with a sentence.

Despite being well-cast (Samuel L. Jackson, Colin Farrell and Michelle Rodriguez) and efficiently staged, this $70 million blockbuster offers virtually nothing to set it apart from dozens of other cops vs. bad guys flicks. A preposterous third act doesn't help matters. Like a bullet shot from a rifle, this is one shiny, noisy and mechanical affair.

In "S.W.A.T.," Farrell takes the lead as officer Jim Street (the Robert Urich part from the original series). Following a hostage standoff, Street and his partner Gamble (Jeremy Renner) are dismissed from the unit after their split-second decisions are deemed too risky by their "paper-pushing punk" of a captain.

Gamble resigns and Street accepts a demotion, hoping to some day return to the elite force. Months later he is recruited to take part in a new five-person team by "Hondo" Harrelson (Samuel L. Jackson), who is described by his peers as "old-school S.W.A.T. -- the gold standard of ass-kickin'." Joining him are two brazen newcomers (Rodriguez and LL Cool J) and two surly veterans (Brian Van Holt and Josh Charles).

Meanwhile, an international arms dealer (Olivier Martinez from "Unfaithful") is apprehended by the L.A.P.D. When the criminal guarantees $100 million to anyone who can spring him, Hondo's squad goes into action to ensure that doesn't happen.

"Even cops dial 911" boasts the nifty tagline on the poster for "S.W.A.T." It's too bad the story never wholly capitalizes on that promise.

The opening scene is emblematic of the movie's shortcomings.

As the Special Weapons and Tactics team responds to a bank robbery, the staginess of the event is immediately apparent. The criminals don't seem to have any rhyme or reason for being there armed in full riot gear, other than to pose a challenge for the police. (I don't recall if they're even holding any bags of loot.) What follows is a rescue operation straight out of Hollywood 101, with screaming masked hoodlums, TV news crews interfering with the endeavor, a hotshot officer disobeying a direct order not to engage, etc.

Once the movie settles down it makes a stab at becoming more character-oriented. Former television director Clark Johnson ("The Shield") has fun setting up the casual relationship between Rodriguez and Farrell during a late-night pub crawl. And for a while there's a decent us-versus-them dynamic working between Hondo's gang and the higher-ups in the department.

Unfortunately, a breakneck but preposterous third act brings the artificial quality back to the forefront.
When the real culprits behind the jailbreak show their faces -- which should come as no shock to anyone who's seen an action movie before -- it summons a barrage of questions from the viewer.

When did they have time to cook up such a complicated rescue mission -- one that would have taken months to coordinate? How did these characters get in contact with each other? How many other people are in on this thing? What's the deal with the ridiculous scenes of anti-police carnage that are all but forgotten once the audience finds out it's just a satellite to the real plot?

Worse, Rodriguez is introduced as this martial arts fighting machine yet she is never asked to do anything but run around and hide from gunfire in the finale. The climactic to-the-death duel only involves Farrell.

Sure, the source material comes from a barely remembered TV series of three decades ago. But the real Los Angeles S.W.A.T. unit should be inspiration enough for crafting a compelling tale.

Maybe the filmmakers should have dialed 911.