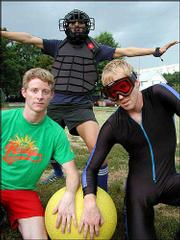 Kickball has never been for the weak.

In grade school and junior high, a kickball game might cause a few scraped knees and a couple of trips to the nurse's office. But in the Kaw Valley Kickball League, the players are fully grown and the stakes are higher.

"It's hilarious to me how serious these grown men and women actually take it," says Kyle Batten, bartender at Louise's Downtown and ball kicker for the Louise's/Eighth Street Tap Room team.

"You have all these people that are out of shape and just go to bars all the time and they're not really athletes, so they've forgotten what it is to stretch out before a game ... I've seen so many people limping around this town."

But this motley crew of musicians, pizza makers, disc jockeys, bartenders and downtown retailers is not deterred by pulled quads, torn ligaments and separated shoulders (all of which have occurred). Every Sunday they take to Lawrence's parks, risking bodily harm in the spirit of competition and camaraderie.

"I haven't had that much fun in a long time," says Ebony Simon, a local hip-hop artist who kicks for GreatCheeseWood, a team built with employees from Great Harvest, The Cheese Shop (where Simon works) and Backwoods.

"Sometimes it got a bit personal, though, just a bit too intense for a recreational league. Then again I guess that could happen with all armchair athletes."

The league is the brainchild of Natalie Winn, a server at Wa Restaurant who sought an activity with her co-workers. Winn brought flyers to downtown businesses and solicited eight teams for the league's inaugural season last summer. This year, the field grew to 20 teams, divided into two conferences and four divisions. The league even sprawled outside the downtown, attracting squads from Yello Sub and college radio station KJHK.

Of the 20 teams that began the season April 27, four are left battling for the bragging rights of winning the championship. Sunday's semifinals at Edgewood Park will pit the undefeated Wattleneck (a team that combines players from Wa Restaurant and The Bottleneck) against The Bourgeois Pig, while Rudy's Pizzeria will take on Louise's Downtown/Eighth Street Tap Room. The winners will compete for the championship Aug. 17 at South Park.

This year marks the first time the league has had playoffs and a championship game. Each contest will have three umpires, who will officiate based on a set of rules developed by Winn.

The nine-inning games are as much social events as competitive sports, players say.

"It's really about the people who make this town work," says Josh Reese, a tattooed pizza chef at Rudy's. "We've met so many other people who work downtown."

Since the games are played in a relaxed atmosphere, it's not uncommon for teams to get together for pre-game drinks.

"Getting drunk seems like a good strategy but doesn't usually work out," says Curtis McCoy, who played for the KJHK team and will umpire the championship games.

Players bring their own individual flair to the playing field. Batten has been known to show up wearing full-body unitards, or "skin-tight buffoonery," as he calls it.

"I try to distract the other teams' ladies -- get them to take their mind off the game and more on the shape of my body," he says. "And I don't have to shave my body hair to run faster."

Teams that can't put enough players on the field from their respective business are allowed to bring in friends to fill the gaps. The substitutions can cause controversy if the ringers end up being better players than the regulars.

"There's definitely some stacking going on," Batten says. "The second time we played Jazzhaus half the team was from Wattleneck."

The Rudy's and Louise's match has been the talk of Rudy's kitchen, where pizza makers discuss strategy while spreading tomato sauce and throwing on toppings. The two teams split their regular season games by unusually low scores of 8-6 and 2-1.

"I would argue Louise's is the toughest team we've played all season," Reese says. "They're true competitors."

Rudy's will have to contend with an athletic Louise's lineup that features two former KU football players, a former WCW wrestler and a kickboxer.

"We have a bunch of washed-up jocks," says Louise's team captain Matt Baum. "We're genetically superior. We should win this thing ... Those hippies over there at Rudy's are pretty good, though. Who knew?"

Members of the Rudy's Pizzeria kickball team watch game action from the sidelines in South Park. In a playoff match Sunday, the Zen Zero team was defeated by Rudy's.

Louise's even went so far as to bring in friend Tony Blevins, a former NFL cornerback and free safety with the Indianapolis Colts.

Blevins, who played football at Kansas University, said he showed up expecting to find a bunch of people "drinking and goofing off" and was surprised at the level of competition.

"There's some pretty serious trash-talking going on," says Blevins, who injured his shoulder making a diving catch. "I'm supposed to be some kind of former athlete or something but I was sidelined for two weeks for playing kickball."

Rudy's secret weapon is its team huddle, employed between innings or in tight situations that call for team strategy.

"They're so wholesome," says Batten. "They don't look like they'd be that good, but their heads are in the game and their hearts are in it."

While Rudy's stakes its claim as the lovable Chicago Cubs of kickball, Wattleneck seems to be establishing a reputation for New York Yankees-esque dominance. After a 12-0 regular season that included 30-run romps over unfortunate teams like the 1-11 Creation Station, Wattleneck is the clear team to beat in the playoffs. 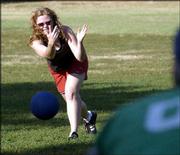 Bourgeois Pig captain Jamie Zoeller, who sat out half the season with torn ligaments in his foot from an ill-fated slide into third base, says he's looking forward to a rematch with the odds-on favorite.

"We're going to play their style and beat 'em at their own game," Zoeller says. "They're sneaky ... they'll run when the second baseman is throwing the ball back to the pitcher."

A league of their own

Lisa Simmons of Papa Keno's Pizzeria says she would like to see the league become more coed, or possibly institute a minimum requirement for the number of girls on a team.

"Some teams would point at the girls, yell 'right there,' and kick it to them," she says.

Already there is talk of a fall season and a third summer season. Organizer Scott Edwards said he would like to keep the pool of teams to 20, but would accept submissions from local businesses if some teams dropped out.

Kickball teammates with Rudy's Pizzeria celebrate a late run during a tournament playoff round Sunday in South Park.

"People don't realize how much work this takes," says Edwards, who sets the schedule, keeps stats and purchases gear. "Between dogs and parks with thorn trees we go through two to three balls a week."

Edwards said some players have expressed interest in traveling to kickball tournaments in Denver and Washington, D.C. The league could also join The World Adult Kickball Association (WAKA), which helps kickball leagues across the country get organized and compete in national tournaments.

Edwards said he was concerned that joining WAKA would spoil the informal nature of the league by making players pay fees and adhering to a specific set of rules.

"We've already got enough people coming out and having a great time," he says. "It's still a work in progress. We're constantly tweaking the rules so people enjoy it more."