A stranger in Senegal

Lawrence poet sings the blues from the heart of darkness

In the strictest sense, Brian Daldorph's "Senegal Blues" is a travel log.

The new poetry collection by the Kansas University English professor recounts his summer 2000 sojourn to the West African country of Senegal.

But it's no vacation scrapbook.

Like so much of Daldorph's work, the poems in "Senegal Blues" (219 Press, $10) paint slivers of isolation and aim pinpoint spotlights at outcasts. Armed with the inquisitive nature of Joseph Conrad's Marlow and the pen power of his Kurtz, Daldorph traveled in Dakar, the Senegalese capital, and taught creative writing at the Universite Gaston Berger in St. Louis, a city of 115,000 on the northwestern coast of Senegal.

Language, nationality, wealth and custom separated him from the people of Senegal. He was lonely, as a May 27 journal entry suggests:

"This is a home day too, just that it's a new home.

"I'll listen to the Sen. River and the muezzin wailing and it shall not be the worst loneliness. I'll clean off the heat with a cold water shower. I'll eat fresh baguettes, drink orange Fanta, listen to Leonard Cohen on my Walkman, and be almost happy."

As he grows accustomed to the solitude -- and learns ways to keep street hustlers from targeting the naive toubab (white person) in the streets -- Daldorph begins to chronicle the place and the people that surround him: fishermen shoving pirogues into choppy waves, begging boys in filthy clothes, dark-skinned Senegalese schoolgirls. And the most destitute, as in the poem "Dakar":

Though the foreword to "Senegal Blues," written by KU professor Byron Caminero-Santangelo, suggests Daldorph intentionally undoes stereotypical images of Africa and "The horror!" Kurtz speaks of in "Heart of Darkness," Daldorph says his intention was just to "present it as I had experienced it."

"I felt like I was expressing what I'd seen there," he says. "And there's certainly, I think, plenty of horror, especially at the kind of terrible poverty that I saw and the things it makes people do. I don't judge them harshly for that. I would do the same in that situation.

"But I think I just wanted to be as honest as possible about the experience."

Fishermen pull their pirogues in at Guet N'Dar, the fishermen's district in St. Louis, Senegal. Lawrence poet Brian Daldorph spent five weeks in the West African country in the summer of 2000. The visit inspired his new poetry collection, "Senegal Blues."

'In Search of Africa'

What emerges from that honesty is a sense of human connection.

In "Sea," Daldorph, a native Englishman, watches fishermen haul in their vessels and writes, "I suddenly realize that the sea here touches my home."

"The Happy Man" who / "wakes at 7, / prays to his God, / eats a big breakfast / prepared by his wives" / and later watches "TV in the evening" defies imperialistic savage stereotypes and isn't a lot different from some Western men.

What does separate the Senegalese people from a portion of the American populace is opportunity, Daldorph discovered through teaching at the Senegalese university.

"The students are very poor for the most part. Unlike American students, they don't have bright futures ahead of them. It's a very poor country, and time and time again I heard that the dream was to get out of there, especially to come to the states," he says.

Still, his students were ambitious, fighting past language barriers to write poetry.

"I was able to communicate with them in English, and French to some extent, but that was a difficulty, especially with trying to do creative writing, where it's hard enough in your own language, but trying to write it in your fourth or fifth language is not too easy," Daldorph says. "It made the teaching particularly interesting and significant. They we were able to achieve anything was really good."

The final section of the book includes half a dozen poems about Daldorph's return to the states at the end of his summer abroad.

In "The Been-To" he writes, / "he brings nothing / but himself after all this time / as though back from some secret war / not the man he was." / There's "Something / about the eyes, a little more / distant, perhaps." / then it's as if the entire trip were a fantasy in "African Dream."

"You dreamed Senegal, didn't you? / You're home, you've always been home / in Sunday morning tranquility."

And finally, Daldorph expresses a sense of being permanently unsettled by his experience.

"Standing on the back porch / I almost feel at home," he writes in "First Poem."

"I think there are a series of poems which really show the kind of disorientation and also there's just a kind of edge of craziness with references especially to 'Heart of Darkness,'" Daldorph says. "But it did feel really odd and strange, and I just didn't know how to put it into words at first, which is what I was trying to do. 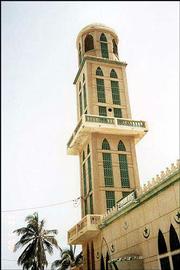 A mosque in St. Louis, Senegal

"Now looking back at those poems ... I do think that I was able to show that kind of disorientation."

He also shows that the so-called heart of darkness doesn't lie exclusively at the core of Joseph Conrad's Congo. Nor is it relegated to the poorest areas of Senegal.

In fact, Daldorph named his book "Senegal Blues," he says, because melancholy and its causes span geographic and cultural boundaries.

"The blues is kind of a universal feeling, and it takes different forms in different places. But you can listen to the blues in Australia, and you'll still feel what it is. I think that in Senegal it just took a different sort of manifestation," he says. "But it's about loneliness and it's about isolation and not knowing who you are and just feeling sort of cut off from the world. And I think you can feel that anywhere."

Lawrence poet Brian Daldorph will be reading selections from his new poetry collection, "Senegal Blues," at the following engagements:

"Senegal Blues" is for sale at Lawrence bookstores, the Lawrence Arts Center and through Perry-based 219 Press. Contact publisher Jason Wesco at (785) 608-3817 or jason@219press.com.