By By Elizabeth A. Kennedy - Associated Press Writer

A little worm travels around, trying to discover his identity. Inchworm? Mealworm? Bookworm?

Actually, the hero of Amy Sedaris' pitch for a children's book was none of those things.

"He's a tequila worm!" Sedaris said during an interview in the Greenwich Village apartment she shares with her pet rabbit, Dusty. "The book is about alcohol, and reaching for the lowest star."

Not surprisingly, the editors at Hyperion passed on the idea.

But Sedaris, who is best known for her role as Jerri Blank, the "user, boozer and loser" of Comedy Central's cult favorite "Strangers With Candy," had another idea, this time for adults.

Again, the plot seems fairly straightforward. "Wigfield," which she wrote with friends and fellow comedians Paul Dinello and Stephen Colbert, is about a town that's about to be flooded by Fresh Springs Creek.

Efforts to save the tiny burgh are described through a series of interviews with residents -- including an elderly couple in their late 30s. Wigfieldians, it seems, age more quickly than most. Something to do with the mercury plant and all those strip clubs.

Mae Ella Padgett, the oldest woman in town at the ripe age of 48, has this to say about Wigfield's merits: "There is no color line here. None of that segregation. Everyone's the same here, as long as everyone's the same. And if they're not, well, things can get pretty ugly pretty quick." 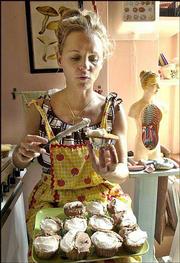 Writer, actress and comedian Amy Sedaris frosts cupcakes, which she sells to a nearby coffee shop, in the kitchen of her New York apartment. Sedaris has a new book out called "Wigfield." She also has played roles in "Sex and the City," the film "Maid in Manhattan" and Comedy Central's "Strangers With Candy."

"Wigfield" is quintessential Sedaris -- off-kilter in a dark, but goofy sort of way. Even her apartment, with its hallways covered in "Flower Kiss" candy wrappers and defaced photographs, is oddly compelling.

"I'm always shocked by people who aren't inspired by anything," said Sedaris, who looks at least a decade younger than her 42 years. "I look at a person on the subway, anyone, and think it could be a funny character."

Own sense of style

Sedaris, whose brother, David, is a popular essayist and contributor to National Public Radio, has recently begun appealing to a larger audience with recurring roles on HBO's "Sex and the City" and "Monk."

Last year, The New York Times praised her as "hilarious and underused" as a nasty socialite in "Maid in Manhattan" with Jennifer Lopez.

And "Strangers With Candy," which ran from 1999 to 2001 and is selling briskly since being released on DVD last month, has a strong following. Sedaris, Colbert and Dinello, who created the series together, are currently writing a movie version for Silverstar Productions.

Fans of her brother, who has written about her with a sense of pride and awe, might know her as the girl who wore a very convincing "fatty suit" to fool their father into believing she had become horribly obese.

Still, Sedaris is rarely recognized in the neighborhood in which she has lived since moving to New York 10 years ago from Chicago, where she was a member of the Second City comedy troupe with Colbert and Dinello.

She probably goes unnoticed because her roles often require her to wear costumes (the photographs in "Wigfield" feature all three authors dressed as everything from police chief to stripper) or contort her face into freakish expressions (Jerri Blank has a wicked overbite).

"I like the characters I play to be a little unattractive," said the North Carolina native, who speaks with a hint of the South. "With Jerri Blank, she thought she was hot and just so stylish. The same with a lot of people in the book. They have their own sense of style."

So does Sedaris. Maybe it's her interview outfit -- a party dress and green clogs -- or those candy-wrappered walls. "I popped all the candy out," she explains.

Or maybe it's that her entire apartment is rabbit-proofed so Dusty can't chew through the electrical wires.

Is she really this weird? Or is she just ACTING weird?

"I work over at Mary's Fish Camp," Sedaris said, referring to a tiny seafood restaurant near her apartment. "I already did my training."

There's a catch, of course. She's allergic to shellfish. But never mind. She worked in restaurants before moving to New York and loved it.

That much is clear from her breadth of projects. Sedaris is the fourth of six children ranging in age from 35-47; she started out as a playwright with brother David in the early 1990s.

They continue to write together under the name "The Talent Family." Their 1995 play, "One Woman Shoe," about welfare mothers who are forced to put on one-woman plays, won an Obie award.