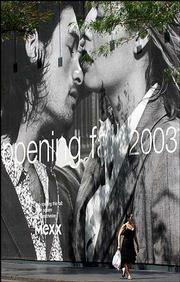 Molly D'Amour of Los Angeles walks past the future site of the MEXX store on New York's Fifth Avenue after shopping at the Hennes & Mauritz store on the same block. Mimicking the success of H&M and other inexpensive foreign fashion imports, Dutch fashion retailer Mexx wants to be the next big foreign hit to make a play for the Manhattan area this fall.

New York — One of the hottest trends in fashion retailing is coming from overseas.

During the past few years, Zara, based in Spain, and Sweden's Hennes & Mauritz have wooed trendy young Americans with inexpensive stylish clothes. Now Dutch retailer Mexx, purchased by apparel maker Liz Claiborne Inc. in 2001, hopes for the same success.

Mexx, which features lots of black and offers such styles as $199 faux shearling-trimmed coats, $59 cargo pants and $69 mesh-lined dresses, is set to open its first U.S. store in September in Manhattan. The 17,000-square-foot store on Fifth Avenue at 52nd Street is on the same block as H&M's 40,000-square-foot site.

Two other Mexx branches, one in lower Manhattan and the other in White Plains, a northern suburb, will follow, and Mexx is expected to expand to other U.S. cities starting next year.

Faith Hope Consolo, a top real estate broker and vice chairman of Garrick-Aug Worldwide, the nation's largest store leasing company, summed up the proliferation of foreign retailers: "We have the fast fashion wars."

Fast fashion chains are moderate-priced retailers that move in and out of trends quickly, frequently getting new shipments of styles. This strategy has already made H&M and Zara successful in this country.

Meanwhile, Consolo said she is working on sites for other foreign retail chains of the same breed -- three from Europe, including another from Sweden, and one from Canada. She declined to offer names.

Consumers say they now can spend less to get stylish clothing.

"I definitely shop less at the department stores and at Gap," said Kimbelyn Miller, of New York, who shops at H&M and Zara."The prices are very, very good, and the fashion is of the moment."

Her latest find at H&M was a $49 punk rock inspired pair of pants, featuring zippers and buckles.

Janette Roberts, of Englewood, N.J., shops twice a week at H&M because she thinks the "quality is very good, and it is cheap."

"They have new stuff every day," said Roberts, who recently purchased cargo pants, a skirt and a jacket at H&M.

Amy Shecter, vice president and general merchandise manager of Mexx USA, believes the chain can take sales away from its competitors because it has its own niche. Mexx has an average retail price of $50. That's about 20 percent below Banana Republic and Club Monaco and 20 percent above Gap and H&M. Mexx also offers different types of clothes, from activewear to office wear.

Mexx officials estimate that Zara's designs, which are more colorful and feminine than Mexx, are about 10 percent more expensive.

"There is not a lot of loyalty to brands in that market. Rather, she said, "there are places that offer a lot of stuff."

H&M had to navigate through some rough patches when it first entered the United States in 2000. While H&M's stores in downtown locations, particularly on Fifth Avenue in New York, have done very well, the company found it has limited appeal in the suburbs.

"We made some mistakes," said Rolf Eriksen, chief executive of the company, which generated worldwide sales of $6.2 billion last year. Now, the company is reducing the size of some of its stores in such areas as Albany, N.Y.

Zara fared better because it took a more cautious approach, according to Consolo, although it did made a mistake entering malls in the Southwest in the early 1990s, Consolo said. It scaled back after realizing that downtown areas were the best locations.

Since Claiborne purchased Mexx, worldwide sales for the brand have more than doubled to over $600 million, as it expanded to new markets. Mexx operates in more than 40 countries and is sold in 7,500 locations, but in the United States it is only focusing on opening stores, not selling to other retailers, Shecter said.

Shecter said Claiborne had studied its competitors and the U.S. market, and will be offering slightly larger clothes tailored for the American consumer. It is also merchandising the fashions a bit more conservatively.