George Plimpton to write his memoirs

By By Hillel Italie - Associated Press

"I have a lot of life left to go, but now is the time to think about it and put something together," Plimpton, 76, told The Associated Press last week.

The memoirs, currently untitled, will be published in 2006 by Little, Brown and Company, which announced the deal Monday. Plimpton, meanwhile, said he had not started the book.

"I have to finish a book on bird watching, believe it or not," he said with a laugh.

Plimpton is best known for "Paper Lion," "Out of My League" and other self-effacing accounts of his attempts at professional sports. But he also has a substantial literary and political background.

As co-founder of The Paris Review, a leading literary publication, Plimpton published early work by such writers as Philip Roth and Jack Kerouac and befriended Hemingway. He has acted in numerous films, including "Reds," directed by Beatty, and "Good Will Hunting."

"I've been very lucky in life. Some of it I've written about, but not other matters," Plimpton said. "I've not written much about literary friends or The Paris Review."

Plimpton has also met several presidents, sailing with President Kennedy and playing tennis with the first President Bush. He served as a volunteer for Robert Kennedy's 1968 presidential run and was walking in front of the candidate in the kitchen of a Los Angeles hotel just as Kennedy was hit by an assassin's bullet. Plimpton helped subdue the murderer, Sirhan Sirhan.

"I don't know what's going to happen with the book until I start," Plimpton said. "What I'll do is dip into a number of areas and take it from there." 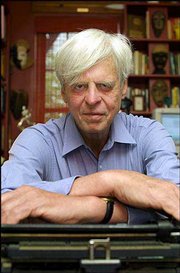