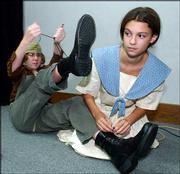 Marrianne Schroer, left, ties her right shoe as Sommer Brecheisen helps her with the left one. Schroer and Brecheisen prepared for a dress rehearsal of "Women of the Wind" on Tuesday at Baker University. The play, written and directed by Lori Lee Triplett of Baldwin, will premiere Tuesday, the final production in Heart of America Performing Arts' summer season.

Baldwin — There are a multitude of female pilots who never got the exposure their male counterparts did, but all that could change soon with the premiere of a new play in Baldwin.

Lori Lee Triplett calls them "Women of the Wind," and when her play by the same name opens Tuesday, history will be brought to life in a drama about the early days of women in flight.

Triplett, director of Heart of America Performing Arts, wrote and directs the play, which opens Tuesday at Baker University's Darby-Hope Theatre. The show is a drama about the 1929 Women's Air Derby and includes such famous characters as Amelia Earhart, Florence "Pancho" Barnes and Gladys O'Donnell. But the story is told through the eyes of two fictional characters, the sisters Eunice and Cora Lee Richford.

"The play originated from me reading stories about Amelia Earhart," Triplett says. "There seemed to be a significant body of work about her, but I started reading about the Women's Air Derby race and was fascinated by it and by the many different women involved in it."

The role of Amelia Earhart is portrayed by Corie Dugas, a Lawrence resident and Baker University student. In addition to her part in the show (the Earhart role is one of the leads), she also has done costume work for other HAPA shows and is a marketing and public relations intern for the group this summer.

She says the Earhart role had been educational -- and daunting, given the historical stature of her character.

"I've done some research on her (Earhart)," Dugas says, "and it's interesting because I've been able to find out a lot about her and what went on behind the scenes. But at the same time, it's hard because so many people already know so much about her."

Though the Richford sisters are at the center of the play, Triplett maintains that the show is an ensemble piece. Despite having so many historical characters to work with, she says she chose to write the play from a fictional protagonist's point-of-view because she wanted the audience to have characters it could relate to.

"Not everyone in the audience will have flown a plane," she says, "and I wanted to show the juxtaposition between what life was like for most women at the time as opposed to what the women flyers were accomplishing."

She adds that she wanted the audience to see what was expected of the play's fictional characters (learning to cook, being a mother and wife, etc.) and show that the women flyers were taking chances and the prices they paid to pursue their dreams.

Some of the women portrayed in the play went on to found the 99s, a women's pilot organization designed to promote women in aviation, as well as restore and maintain the history of women in flight.

The play partly addresses the formation of the 99s. During the 1929 Air Derby, the women flying in the race had the first kernel of an idea to start a women's flying organization, Triplett says. Formation of the 99s was first discussed in Cleveland, Ohio, at the end of the race, though the details weren't fully fleshed out until later.

On Aug. 24, more than 20 members of the 99s will fly in to see the play from Kansas, Nebraska and Iowa, says 99s charity flights co-chairwoman Ann Shaneyfelt, who along with other 99s helped Triplett research and promote the play.

Triplett was allowed access to all the 99s' archival information, as well as to documents at the Amelia Earhart Birthplace Museum in Atchison. The 99s also helped promote the play through other aviation groups like the Kansas Pilots Assn. and promoted it at airports the groups fly to.

Shaneyfelt, who waited until her children were grown before she began flying, says she hopes the play will raise awareness of women flyers.

"I think it will help make everyone aware of what these women did and the obstacles they faced," Shaneyfelt says. "We're very appreciative of Lori doing this research and bringing this to life. There are many women flyers that you've never heard of -- they didn't have the publicist or the money behind them like Amelia Earhart did."

Dugas is also hopeful that the play will raise awareness -- not only of women flyers, but also of HAPA.

"I think having the 99s fly-in is going to help make the community a lot more aware of what we're doing," she says, "and there are also several Baldwin residents in the show."

In conjunction with the play, Heart of America Performing Arts will have a playwriting workshop beginning at 1 p.m. Aug. 16. The fee is $10. HAPA is currently accepting scripts for the workshop.

"One of the things HAPA would like to do is promote regional talent," Triplett says. "We're doing the playwriting workshop in conjunction with this, and we're hoping to get plays to use for next year."