Show links Chicago with art of the Southwest

Chicago — Imagine an exhibition of Southwestern art without a single coyote howling beside a saguaro cactus. And now imagine that exhibition in shingle-flat Chicago, where the manmade landscape seems a world removed from the arroyos and mesas of New Mexico.

"Window on the West: Chicago and the New Frontier, 1890-1940," is just that exhibition -- a look at the pivotal role Chicago's philanthropists, railroaders and politicians played in encouraging and subsidizing successive waves of Southwestern artists.

The show on view at the Art Institute of Chicago presents more than 115 works on the West by 19th- and 20th-century artists with connections to Chicago. Many of the paintings, sculptures and drawings are from the museum's own collection but had not been on public display in 40 or 50 years. Some of the works are from the Ayer collection of the Newberry Library in Chicago.

The almost-forgotten works fascinated curator Judith Barter, who described one of her greatest pleasures as simply "rooting around storage." It was while researching the Art Institute's large collection of paintings and bronzes by popular artist Frederic Remington that Barter realized just how much Western art was in those storage rooms.

"I discovered that Chicago was a crucial center in creating and fostering the country's image of the West," Barter said.

That relationship, she said, was cemented in 1893 when historian Frederick Jackson Turner presented his influential paper, "The Significance of the Frontier in American History." Jackson's paper, which was presented at the building that soon became the Art Institute, announced the closing of the frontier and gave notice that the Old West was coming to an end.

Coupled with the interest in the ethnographic pictures of Native Americans produced for the World's Columbian Exposition of that same year, Jackson's paper sent many artists westward in search of something vanishing and irreplaceable.

Many of those artists had subsidies from Chicago businessmen, particularly from lumber baron and self-taught scholar Edward E. Ayer, who began his career as an illiterate teenage cavalryman in the Southwest during the Civil War. It had been Ayer's duty to fight Indians, but when he learned to read, he became a student of their various cultures. 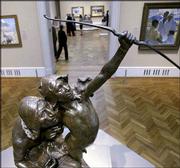 Hermon Atkins MacNeil's "The Sun Vow," modeled in 1898 and cast in 1901, commands a room at the Art Institute of Chicago's exhibit on western art. The exhibition, titled "Windows on the West: Chicago and the Art of the New Frontier, 1890-1940," is a look at the pivotal role Chicago's philanthropists, railroaders and politicians played in encouraging and subsidizing successive waves of Southwestern artists.

"We have simply destroyed a great race of human beings, in many virtues our superiors," Ayer wrote in the 1890s. To help preserve what was left of the tribes of the Southwest and to propagandize on their behalf, Ayer dispatched artists, including his nephew, Elbridge Ayer Burbank, into the region.

Other artists to enjoy Ayer's patronage included sculptor Hermon Atkins MacNeil and his painter friend, Charles Francis Browne. Along with Burbank, they were among the first white Americans to witness and document the Hopi Snake Dance.

The next generation of Southwestern artists also had Chicago patrons. Restaurateur Frederick Henry Harvey, who ran the Santa Fe dining cars, as well as restaurants, inns and resort hotels along its route, wanted to decorate his facilities in Southwestern style and was willing to pay artists generously to do so. Even more financial support came from Carter H. Harrison Jr., a progressive Democrat who served five terms as Chicago mayor, from 1897 to 1915.

Harrison's father, also a five-term mayor of Chicago, was assassinated in 1893, a few months after Jackson delivered his paper. The senior Harrison had land holdings in the West, and his son spent much of his youth in New Mexico, becoming an accomplished ethnographic photographer. As mayor, he offered financial support to Chicago artists willing to live and work in Taos, N.M. Those painters, who included Walter Ufer and Victor Higgins, practiced a form of sun-drenched realism and became the core of the Taos Society of Artists.

In the early years, the artists sent West from Chicago concentrated on American Indians, but that all changed in 1915, when the erudite Harrison was succeeded by another Western-reared Chicagoan, William Hale "Big Bill" Thompson. The bullnecked Thompson was an isolationist Republican who once made a campaign promise to punch the king of England in the nose if His Majesty ever dared visit Chicago. He eventually became an ally of Al Capone.

To Thompson, who had ranched in Nebraska and Wyoming, the cowboy was king. And his right-hand man, George F. Harding Jr., was an even bigger cowboy fan. At his South Side "castle," Harding assembled what he called his "red-blooded" art collection, which consisted of medieval weapons, plus a great number of Remington's Western paintings and cowboy bronzes. Most of them eventually made their way to the Art Institute, and many are now on display.

Later rooms of the exhibition are devoted to the Santa Fe School of the World War I years and 1920s, where the influence of the French postimpressionists can be seen. Many of those artists, like Gustave Baumann, had been sent West by Harrison.