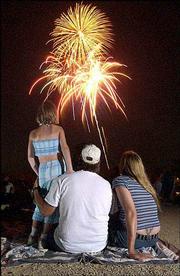 I wanted to attempt a July 4 fireworks display photograph that also included people.

The first and most critical decision was to select a location where my lens could capture both subjects. I chose the Kansas River levee, southeast of the firing area. As people arrived, I chose a family of three, took a spot behind them and set up my equipment.

I put my camera on a tripod, placed it very low to the ground and composed a frame with the family in the bottom half and (hopefully) the fireworks above. I next set up two battery-powered flash units, one to the right and a little behind the subjects and one at left, each fired by a wireless radio trigger. Then I set my camera to "bulb," which enables a time exposure.

At the start of a series of fireworks bursts, I pressed the camera's shutter, firing the flashes and making an initial exposure of the family. While continuing to hold down on the shutter button for the time exposure, I would cover and uncover the front of my lens with a card to catch additional fireworks and "paint" a colorful display above the exposure of the family.