New York — It's expected commentary: Shoppers, browsers and magazine readers wondering aloud if people in the fashion industry eat, let alone eat something as satisfying, sweet and caloric as chocolate. After all, the skeptics say, how do these style-minders fit into their micro-miniskirts if they're filling up on fabulous food?

But, can people -- even fashionistas -- really live without foods as satisfying, sweet and caloric as chocolate? Or creme de caramel? Or vanilla pudding?

Judging from what's on retailers' shelves today, the answer appears to be no.

Kate Spade created tote bags based on Haagen-Dazs ice cream flavors. Candy Corner is a line of cosmetics that smell and are packaged like Charms, Tootsie Rolls and Twizzlers. New York's Chocolate Bar, primarily a sweets store, is selling its "Chocolate Girl" and "Chocolate Boy" T-shirts like hot cakes.

The shirts are cotton Ts with block letters. Store co-owner Alison Nelson says most people are attracted by the shirts' blank canvas, which each wearer fills in with a favorite chocolate story.

"Chocolate in general carries so many ideas, feelings, images, and it means so much to different people. It's why we kept the T-shirts so simple. It makes it personal for whoever sees them or wears them," Nelson says.

Since Nelson and her business partner Matt Lewis are food people, not fashion people, the shirts happened by accident. At tasting events, store employees wore "chocolate" stickers across the chest of their brown T-shirts. Customers would offer $20 for the shirts on the spot.

"I guess it's a way of indulging without actually putting something in your mouth," Nelson says. 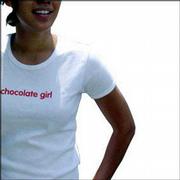 Sweets-themed fashion, such as this shirt from New York's Chocolate Bar, are popular. Fashion experts say the products allow their owners to indulge in good taste without bulking up on fat and calories.

"Candyland" serves as the inspiration for designer Cynthia Rowley's next collection. "It'll be over-the-top sweets," she says of her spring 2004 line, which will feature umbrellas with candy-cane handles.

"For most of us, candy is the forbidden fruit," she says. But because it also reminds many people of their youth, there is something innately flirty and fun about sweets, she adds.

Sweet scents are very popular in beauty products, mostly because they are a low-calorie indulgence, says Hollis Hillhouse, international director of education for L'Occitane.

"I don't know why sociologically they are so popular, but it seems like they (scented products) are a replacement for things that really aren't good for us," she says.

But as attractive as the smells of creme caramel, candied fruit, vanilla and honey are, L'Occitane uses them as a way of connecting with the company's Mediterranean roots and taking advantage of their homeopathic properties, Hillhouse explains.

L'Occitane uses sweet smells, such as that of creme caramel, to stir up happy memories.

For instance, the creme caramel and candied fruit-scented candles, first introduced as holiday gifts, pay homage to the 13 traditional desserts served after the Christmas dinner in Provence, France, she explains. Honey, she adds, is known to be moisturizing, soothing and nourishing to skin.

"Our founder remembers his childhood in his grandmother's kitchen in Provence, and he's on a mission to recreate and preserve it," according to Hillhouse. "We've had cinnamon and orange and vanilla in our fragrances since the 1970s."

Science has proven that odors are important memory stimulants, and people seem drawn to citrus and sweet smells because they instantly transport people to happy times in their lives, often from childhood, Hillhouse says. But, she adds, because the associations are so personal, it's difficult to create food-scented products that have universal appeal.

"I like citrus smells. I don't like sweet smells as much," Hillhouse says. "But I'd rather eat a cookie than a banana. Maybe that's why I wear the citrus -- I'm compensating for the cookies I eat."