Los Angeles — Gregory Hines, the greatest tap dancer of his generation who transcended the stage with a successful screen career that included starring roles in "White Nights" and "The Cotton Club," has died at 57.

With his smooth, solo tap style reminiscent of Fred Astaire, Hines became internationally known at a young age as part of a jazz tap duo with his brother, Maurice. He won a 1992 Tony Award for the musical "Jelly's Last Jam."

"His dancing came from something very real," said Bernadette Peters, who appeared with Hines as co-hosts of the 2002 Tony Awards show. "It came out of his instincts, his impulses and his amazing creativity. His whole heart and soul went into everything he did."

"He was the last of a kind of immaculate performer -- a singer, dancer, actor and a personality," said George Wolfe, who directed "Jelly." "He knew how to command."

Hines and his brother performed together in the musical revue "Eubie!" in 1978, in Broadway's "Sophisticated Ladies" and on film in 1984's "The Cotton Club."

In "The Cotton Club," Hines also had a lead acting role, which led to more offers from Hollywood. He starred with Mikhail Baryshnikov in 1985's Cold War-era dancers' story "White Nights" and with Billy Crystal in 1986's "Running Scared," and he appeared with Whitney Houston and Angela Bassett in 1995's "Waiting to Exhale," among other movies.

On television, he had his own series in 1997 called "The Gregory Hines Show," as well as a recurring role on "Will and Grace." Last March, he appeared in the spring television series "Lost at Home."

Gregory Oliver Hines was born Feb. 14, 1946, in New York City. He has said his mother urged him and his older brother toward tap dancing because she wanted them to have a way out of the ghetto. 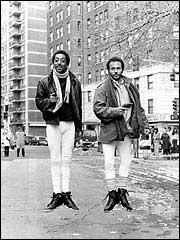 Gregory Hines, left, and Billy Crystal are shown on location in the streets of Chicago for the filming of "Running Scared" in this 1986 handout photo. Tony Award-winner Hines, the tap-dancing actor who starred on Broadway and in movies including "White Nights," has died, his publicist said. He was 57. Hines died Saturday in Los Angeles of cancer, publicist Allen Eichorn said.

When he was a toddler, his brother was already taking tap lessons and would come home and teach him steps. They began performing together when Hines was 5, and they performed at the Apollo Theater in Harlem for two weeks when he was 6. In 1954, they were cast in the Broadway musical "The Girl in Pink Tights."

For "Eubie!," Hines was lauded for his singing of "Low Down Blues" and his rat-tat-tat tapping during "Hot Feet." He won several awards and was nominated for a Tony.

Hines landed his first film role in the 1981 Mel Brooks comedy "History of the World Part I," in which he played a Roman slave as a last-minute replacement for Richard Pryor. He has since been nominated for a number of awards, most recently an Emmy in 2001 for his lead role in the miniseries "Bojangles."

He also won a Daytime Emmy Award in 1999 for his work as the voice of "Big Bill" in the Bill Cosby animated TV series, "Little Bill," and NAACP Image Awards for "Bojangles" and "Running Scared."

Hines was engaged to Negrita Jayde and, in addition to his father and brother, is survived by his daughter Daria, son Zach, grandson Lucian and stepdaughter Jessica Koslow.