Los Angeles — Arnold Schwarzenegger's foray into California's gubernatorial recall election poses a dilemma for broadcasters who might be tempted to show his films during the race: Doing so would allow rival candidates to demand equal time.

For that reason, broadcasters in California will likely not air Schwarzenegger movies such as "Total Recall" and the "Terminator" or a repeat of a "Diff'rent Strokes" episode with Gary Coleman for the next few months.

Cable channels are not covered by the Federal Communications Commission's equal-time provision, which in the past kept reruns of "Death Valley Days" off the air while Ronald Reagan ran for president. A repeat of a "Saturday Night Live" episode featuring Don Novello, aka Father Guido Sarducci, on cable, for instance, would not trigger the provision.

Novello, Schwarzenegger, Coleman and more than 240 other candidates have filed to run in the Oct. 7 election to recall Gov. Gray Davis. The equal-time rule kicks in on Wednesday, when the state is expected to officially certify the list of candidates.

The major networks do not have a Schwarzenegger movie scheduled over the next two months, but local stations can make their own decisions about what to air.

The National Association of Broadcasters sent an alert to its California members reminding them about the consequences of the equal-time provision. The provision would also apply to stations in neighboring states that reach a sizable number of California voters.

"It's doubtful Arnold's movies will be shown on local broadcast stations between now and the election," said Dennis Wharton, an NAB spokesman.

Equal time is not automatic. Candidates must file a request within seven days, and the provision makes exceptions for appearances on news programs, interview programs such as "Meet the Press," documentaries or spot coverage of news events.

The FCC has ruled in the past that shows such as "Entertainment Tonight" and "Access Hollywood," which are likely to devote a lot of air time to the celebrity aspect of the election, qualify as news shows.

The number of candidates in California's recall race makes equal-time concerns even more thorny. The one candidate with questionable standing? Gray Davis.

California's recall statute does not recognize Davis as a candidate in the recall election, but the FCC most likely would, based on a previous ruling. 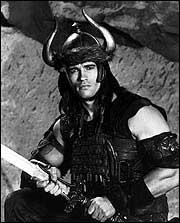 Arnold Schwarzenegger is shown in character as "Conan the Barbarian" in this 1982 photo. Network broadcasters are unlikely to air Schwarzenegger's films during the campaign for the California recall election, because doing so would allow rival candidates to demand equal time.

The Oct. 7 ballot will ask voters if they want to recall Davis, but his name will not appear on the list of replacement candidates. The FCC ruled in a similar recall situation that it would be unfair not to give the incumbent an equal chance to answer his critics.

The rule also requires broadcasters and radio stations to offer candidates their lowest advertising rates, a right that would be given to Davis along with the other candidates based on the FCC's previous ruling.

Celebrity candidacies have led to broadcasting dilemmas in the past.

In 2000, some CBS affiliates in East Texas had to pre-empt some rerun episodes of "Walker, Texas Ranger," because character actor Noble Willingham, who appeared as a bartender on the show, was running for Congress.

When Reagan ran for California governor in the 1960s, the show "Death Valley Days" took on a different host to avoid being essentially barred from the air.

In 1972, NBC aired a Doris Day movie in which comedian Pat Paulsen appeared for 30 seconds. Because Paulsen had launched a satiric presidential campaign, he was ruled a legitimate candidate. Two Republican candidates requested and got 30 seconds in the same time slot as a result.