Every year it gets harder for EA Sports to convince the masses to shell out another fifty bones for the newest Madden. It's up to them to invent a fresh new perspective on gameplay to make it worth the yearly purchase. Not only is Madden 2004 the best in the series, but you won't understand how you could live without the new Playmaker feature and Owner mode. 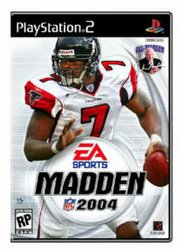 Two at a time

Whenever you called a play in previous Maddens, there was a looming fear that the AI would already know your running or passing routes and not adjust on the fly like real football since, well, it IS the computer, right? Even though that's not entirely true, the new Playmaker feature will totally demolish that fear that the AI is cheating. For instance, after the snap you control the quarterback's movement with the left thumbstick as usual. But with the right thumbstick you can control one of your receivers to break his intended route. If his route was a slant left and he is running into double coverage, press right on the thumbstick to make him cut right, or press down to make him do a short hook. Now, only truly good defenses will be able to adjust to the receiver breaking a route.

You can also designate a new route for one receiver before the snap and alternate coverage on defense with Playmaker, but the revolution really comes alive after the snap on offense. Playmaker executes smoothly and wins the new feature battle over Sega's disappointing first-person mode in this year's ESPN NFL Football.

Another huge feature is the new Owner Mode. Sporting an incredibly deep Franchise Mode already, EA lets you take control of the money. Set the prices for beer, soda, food, hats, bobble-heads, parking tickets and much more while luring advertisers for your billboards to keep your head above water financially. If things aren't looking up, you can throw a Fan Appreciation Day, giving away free merchandise, to boost attendance.

When you begin Franchise Mode, you are thrown into training camp where you can play the nine mini-games from last year. Then you go through preseason. After preseason is complete, you take on the wonderful role of the owner. The depth of team involvement is unmatched.

Madden cards, create-a-team and create-a-player all make a return as you would expect, making Madden feature-rich through and through.

The PS2 version is online, increasing its value for some, although most football games are enjoyed with friends in-house or alone. The Gamecube version can link up with the Game Boy Advance to hide plays, unlock teams and other goodies.

The graphics look the same as last year, which isn't bad. The PS2 does not support progressive scan like the Gamecube and Xbox, but they all can run in widescreen. One major upgrade in the graphic department is the amount of new animations. Like NCAA 2004, the collision detection looks more realistic, there are new tackling animations and the players' movement looks even more accurate this year. But unfortunately the only real faces in the game are the coaches and assistants. I am not sure why EA continues to use generic faces when Sega has been doing real player faces for so long. Hello, EA -- it's 2004, welcome to the 90's.

What will I hear?

Al Michaels' commentary takes a major step up with tons of speech added to every nook and cranny of the game only to be offset by Madden's drab idiocy that hasn't changed much. Also the tone matching is still a problem. For instance when introducing a match-up, "Today's game has..." is in one tone of voice while the team name that follows is in a completely different tone. While last year's soundtrack sided on rock, this year's edition has much more hip-hop.

The end result is a well-oiled machine that warrants fifty bucks more than any other update before it. For all my D.C. faithful out there: "Go Redskins!"