Golden Valley, Minn. — Legend has it that in 1958, when General Mills moved into its new headquarters, Charlie Bell, who was then the company's president, took a look around and said, "It's too gray in here. We've got to do something to enliven this building."

His solution was to buy art and display it throughout the building and its lush, parklike grounds.

General Mills didn't snatch up just any art, though. It turned to some of the hot, young emerging artists of the day -- Jim Dine, David Hockney, Jasper Johns, Roy Lichtenstein and Robert Mapplethorpe.

Today, in an era of corporate cutbacks and pressures to increase employee productivity, sales and profits, General Mills is a holdout in stressing the importance of art in its corporate culture.

The company displays original art and limited edition prints throughout its headquarters and encourages employees with offices to choose pieces they like for display in their workspace. General Mills even has a full-time curator to oversee acquisitions, sales and care of the collection.

"General Mills doesn't consider it to be an investment, doesn't expect it to perform as an investment and doesn't look at it monetarily at all," said Don McNeil, the curator who has managed the collection for more than 27 years.

That attitude, people in the field say, is unusual these days.

Many companies -- including Reader's Digest, CBS, IBM and Time Warner -- sold off expensive collections in the late 1990s when the economy was good and they could turn a profit on the art. Others, such as Arthur Andersen LLP, have liquidated collections during economic crises.

The commitment to corporate art has been shrinking since the boom years of collecting in the 1980s, said Greg Hennes, chief executive of Art Holdings Inc., which provides art consultation, sells and leases art and operates Look Gallery shops in Marshall Field's stores.

"There isn't as great a desire for corporations to have an art collection as there used to be," Hennes said. "Economically, it's not as popular with shareholders as it used to be, and they need to focus on their business." 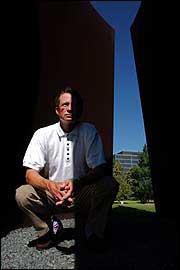 Don McNeil, curator for General Mills, kneels inside a large steel sculpture on the grounds of the company's headquarters, background, in Golden Valley, Minn. McNeil has overseen the corporate collection for 27 years. The sculpture by Richard Serra is titled "Core."

Companies that have maintained a focus on art say they do it for several reasons: to challenge and provide enjoyment for employees, to support local or emerging artists, to impress or entertain clients or to promote a particular image or product.

"We want to create an aesthetically pleasing work environment that everyone can enjoy and also support artists by purchasing and commissioning their work," said spokeswoman Lena Klofstad.

Nationally, A.G. Edwards, a St. Louis-based financial services holding company, is among companies that still have a full-time curator -- plus an assistant -- to oversee a collection of about 4,500 artworks. Although A.G. Edwards has been re-evaluating the collection and scaling back, the company continues to view it as a valuable asset.

But other companies have backed away.

In 1999, after its merger with Wells Fargo & Co., Norwest Bank Minnesota donated its $5 million-plus collection of early 20th-century furniture, tableware and decorative objects to the Minneapolis Institute of Arts because the collection had become too large to display and the company felt it should be available to a wider audience.

3M, which has about 3,000 artworks in its collection, hasn't had a full-time curator for nearly a decade, said spokesman John Cornwell. The company simply has enough art for now, he said.

McNeil, as a full-time curator, is one of a shrinking breed, Hennes said.

General Mills wouldn't say what it spends annually on art and caretaking, and doesn't track the value of its collection, which also includes works by Claes Oldenburg, Robert Rauschenberg, Frank Stella, Siah Armajani and Louise Nevelson.

McNeil did say General Mills has spent more on art the past two years in preparation for the Sept. 26 opening of two new buildings at its headquarters to accommodate Pillsbury Co., which was acquired in 2001.

Many companies now look at art as a way to promote their image or their products, Hennes said. Art Holdings has commissioned artwork for companies that incorporated logos or product materials.

"I think companies would rather spend their money creating things that say who they are and what they're about," Hennes said, "but not necessarily trying to make a statement from a collectibility standpoint."