New York — The peeling, crumbling tenements that once housed beatniks, hippies, musicians and artists are being taken over by young professionals eager to renovate not only the buildings but the neighborhood itself.

Once a center of counterculture, where artists like Allen Ginsberg and Patti Smith helped define the angst of their generations, the East Village appears to be turning slowly into yet another enclave of high-priced condos and co-ops.

But before another artist decamps for Brooklyn or Queens, a group of East Villagers is hoping to rekindle the neighborhood's defiant spirit with a weeklong festival of poetry, theater, performance art, parades, film screenings and exhibitions.

The HOWL! festival will feature 260 eclectic events at spots throughout the East Village, and will give participants the chance to celebrate 50 years of history and, the organizers hope, to breathe life into the local art scene.

"It's like we've got a body lying in the emergency room and we need to fibrillate it," said Philip Hartman, the executive director of the Federation of East Village Artists, which is organizing the event that runs Aug. 20-26.

Named after Ginsberg's seminal 1956 poem, HOWL! will give artists and performers the chance to show their work while paying tribute to the legion of artists, rebels and thinkers -- from writers Ginsberg and Jack Kerouac to musician Joey Ramone to poet-musician Smith -- who have left their mark on the East Village.

Some HOWL! highlights include the Allen Ginsberg Poetry Festival, a night of readings by poets such as Anne Waldman; X Marks the Spot, a group of performances given by artists in their East Village apartments; Avant Garde(n), a series of film screenings in various East Village parks; the Charlie Parker Jazz Festival; the Wigstock drag festival; and Viva Charas, a celebration of Spanish music and dance.

And recognizing the quirky originality of the East Village, there also will be plenty of eccentricities, including a parade of 20 papier-mache likenesses of famous East Villagers such as the late English eccentric and raconteur Quentin Crisp, artist Keith Haring and the fiery activist Emma Goldman.

Actor Steve Buscemi, performance artist Penny Arcade and musician Lou Reed are among the festival's participants. Many others, including rock icons David Byrne and Debbie Harry and composer Philip Glass, have lent their support. 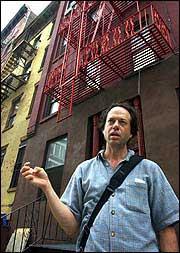 Philip Hartman, executive director of the Federation of East Village Artists, gestures while talking in New York's East Village about his efforts to preserve the history of the neighborhood. The artists group hopes it can rekindle the East Village's defiant spirit with the weeklong HOWL! festival of poetry, theater, performance art, parades, film screenings and exhibitions, which runs Wednesday through Aug. 26.

"The East Village has been a very important place for developing new and progressive ideas in music and performance art," said Glass, a resident of the East Village since 1968. "It's important that the community that nurtures this have their own festival."

Hartman, a filmmaker and owner of the Two Boots pizza chain, said he hopes the festival will help rejuvenate the spirit of the neighborhood with which he fell in love in 1980, when it was synonymous with punk rock and underground chic.

"What other neighborhood in the world is the headquarters for the Hare Krishna and the Hell's Angels?" Hartman asked as he stood by the tree in Tompkins Square Park where the first Hare Krishna outdoor chanting session took place in 1966.

"I can't bear the thought that this place would become homogenized with chain stores."

After years of watching developers come into the neighborhood, Hartman said he was moved to act last year when the organizers of the regular Charlie Parker Jazz Festival announced that they, too, were calling it quits.

By spearheading HOWL! Hartman was able to rescue the jazz festival while resuscitating other defunct happenings, including Art Around the Park, which invites artists to decorate a blank canvas draped around Tompkins Square Park.

On Valentine's Day, Hartman scored another coup. With a heart-shaped pizza, he persuaded drag queen Lady Bunny to bring Wigstock back to Tompkins Square Park, where it began in 1985. The drag festival had moved to a larger venue in 1994 and closed in 2001.

HOWL! marks 50 years since the counterculture took root in what later became known as the East Village. Willem de Kooning and Ginsberg moved there in the early 1950s. About a decade later, the term "East Village" evolved to distinguish the neighborhood east of Third Avenue and north of Houston Street from the more established Greenwich Village on the West Side, and the Lower East Side, where immigrants from around the world lived.

Once the festival is over, Hartman plans to raise money to build a museum -- the "Smithsonian of the counterculture" -- and to create a support network for struggling area artists.

"The world will be a poorer place if there's no East Village," Hartman said. "This has to be a home base."