From James to Jenny

Waterville, Maine — A loving husband and father, acclaimed novelist, respected professor at Colby College and keyboardist in a rock 'n' roll band, James Finney Boylan had an enviable life that overflowed with success and happiness.

Or so it seemed.

The reality, which Boylan kept secret for decades, was that he was a she, a woman locked in a man's body. The person who appeared to be so blessed says she was living a life of unending torment.

Four years ago, recognizing that he could no longer go on as he had, Boylan set out on a transition to womanhood, emerging as Jennifer Finney Boylan.

That journey, bolstered by the support of family and friends, is detailed in Boylan's poignant yet often comical memoir, "She's Not There: A Life in Two Genders."

Tall and willowy, with long blond hair, Boylan, 45, says she would have preferred to soldier on in silence as a man, sparing herself and her loved ones much sadness and pain. But she maintains she had no choice but to accept her transsexuality and deal with it.

"We can no more choose our gender than we can choose our height," she said in an interview in her office, where she co-chairs Colby's English department. "You don't decide to become female; it's simply a matter of accepting a fact."

For people without gender issues, Boylan says, it is difficult to imagine "that a person's discontent within their own skin could be so severe as to make any other life inconceivable."

That was the case for Boylan, whose anguish set her on a path that went from psychotherapy to female hormones, painful electrolysis and voice coaching before culminating in gender reassignment surgery last year. As author of three comic novels, including "The Planets" and "Getting In," Boylan realized early on that she was in the midst of a remarkable story that straddled humor and tragedy as it detailed her metamorphosis to womanhood. 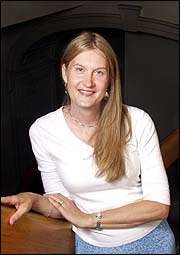 Jennifer Finney Boylan, the Colby College Professor who was a man and is now a woman, poses in the Miller Library at Colby College in Waterville, Maine. Boylan has written a book titled "She's Not There: A Life in Two Genders," which documents her gender transition.

"In many ways, that defines the condition," says Boylan.

Making it up as they go

Although she does not regard herself as an activist, Boylan hopes that her memoir will promote greater understanding of what it means to be transgendered. Her biggest concern was to tell her story without jeopardizing her family's privacy.

Boylan changed the names of many of the people in her book, including "Grace," the then-wife and now-partner whose love and support have been unflinching throughout. Their evolving relationship, now sexless, is a work in progress.

"There's not a good word for what we are. We're certainly not husband and wife. We're not a lesbian couple. We are co-parents, we're friends and we are lovers in many senses of that word," she says. "We're two pretty average people thrown into remarkable circumstances, and we're just making it up as we go along, trying to do the best we can."

Their two sons, now 7 and 9, seem to take the change in stride. Early on, they took to calling Boylan Maddy -- a combination of Mommy and Daddy -- and the name stuck.

Boylan acknowledges that she is now attracted to men -- she says her surgeon told her that his goal was to make her "sensate, mucosal and orgasmic." But Boylan says she and Grace remain married under the law and neither has yet explored other relationships.

"We both want most what normal, straight women want -- which is to be loved, to have a good family, to be respected at our jobs, to have good friends. We have most of that. What we don't have is a marriage, and I'm not sure we're willing to sacrifice the other things in order to move ahead with a new relationship," Boylan says.

'The person who's not there'

Aside from appearance, Boylan says her biggest change is a loss of the sense of invulnerability she felt as a man. Things that would bounce off the testosterone-laden James now, under the spell of estrogen, tend to get under Jenny's skin.

"I cry very easily," she says. "I love the freedom of tears, but it is unnerving in some ways how close they lie to the surface."

Boylan also wishes she could be less self-conscious about calories and body image. Still, she often finds herself choosing a salad for lunch whereas James would have ordered a plate of ribs.

Even so, Boylan says there was little about being a man that she misses. The one thing that came to mind was pockets. Neither her blue calf-length skirt nor her white V-neck shirt had any, and she prefers to stuff her change and other items into pockets rather than lug them in a purse.

"She's Not There" contains an afterword by Boylan's best friend, Pulitzer Prize-winning novelist Richard Russo, who taught at Colby and shared an office with her. Russo, who figures prominently in the memoir, initially has a hard time dealing with Boylan's transsexuality but quickly comes around and later accompanies his friend and Grace to Wisconsin for the surgery.

The title of the book comes from the 1964 classic by the Zombies, which haunted Boylan at various moments in her life.

The song evokes her earlier years, when she was spiritually a woman but physically a man; it also speaks to the period when she became a woman and lost a marriage, "and so the person who's not there is a wife."