There's a method to the timing of the Spencer Museum of Art's newest exhibition.

"The Orchid Pavilion Gathering: Chinese Paintings from the University of Michigan Museum of Art" opened Saturday at the Kansas University museum -- just in time for the fall semester and just in time to sit in for the nearest Chinese collection, which is currently closed during renovations at Kansas City's Nelson-Atkins Museum of Art.

KU art history professor Marsha Haufler requested the 60-piece show that spans nearly 900 years as a teaching tool -- one that will benefit the public as well as her students.

"This is an opportunity to enjoy Chinese paintings while those are locked up," she said.

And when it comes to enjoying Chinese paintings, there's more to absorb than viewers often think, Haufler said.

"People come to Chinese painting exhibits assuming it's going to be all rocks and trees and mountains," she said. "But there's also some very nice figure paintings and some interesting paintings of flowers and birds."

The University of Michigan museum has a long history of collecting Chinese art, just as the Spencer has worked to build a sizable Japanese collection. Works in "The Orchid Pavilion Gathering" are from later periods than many of those treasured at the Nelson-Atkins, mostly because a university museum can't afford such rare pieces.

But the works featured in the traveling show give a broad sweep of major movements, major schools and fairly major artists from the Ming (1368-1644) and Ch'ing (1644-1911) dynasties. An extensive catalog accompanying the exhibit explains the subject matter in the paintings as well as the materials and formats used by the artists. The abundance of information is meant to help with the cultural and language barriers that sometimes keep Western audiences from fully appreciating Chinese painting, said exhibition curator Marshall Wu, senior curator of Asian art at the Michigan museum.

One cultural lesson that comes through in the collection is the way regions in China formed distinctive tastes through the centuries.

This Ming dynasty painting by Sheng Mao-yeh is the signature work in "The Orchid Pavilion Gathering: Chinese Paintings from the University of Michigan Museum of Art," which opened Saturday at the Spencer Museum of Art.

"There were a number of very affluent cities in China. These cities developed distinctive aesthetic cultures, and schools of painting arose in these cities or regions," Haufler said. "One of the ways you can approach Ming paintings is regionally by looking at paintings that were done in, for example, Suzhou, the city that is famous for its canals and gardens. A lot of the paintings in the show were made by artist working in Suzhou and the Suzhou area."

The title of the exhibition comes from a famous and oft-painted event in Chinese history that is represented in a work by Sheng Mao-yeh from the Ming dynasty. 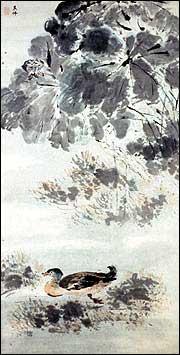 "It tells the story of a scholarly gathering that took place in spring at a site called the Orchid Pavilion. A group of scholars met in the Orchid Pavilion in the year 353, more than 1,000 years before (Mao-yeh's) 1621 painting," Haufler said. "They met there with the idea of spending the day writing poetry and drinking. It's a picture of them enjoying this beautiful site."

A famous Chinese calligrapher, Wang Xichi, built the private retreat near the modern city of Shaoxing during the Tsin dynasty (317-419). He and his friends and relatives would gather there for springtime purification rituals. Cups were floated down a creek, and guests were to compose a poem when a cup arrived at their spot or drink three dippers of wine. The gathering became a symbol of escape from bureaucratic life, and the subject has been repeated frequently in Chinese and Japanese painting.

Even though there's much to be learned from "The Orchid Pavilion Gathering," Haufler said visiting the exhibit could be a purely relaxing, transcendental experience.

"It's a sort of escape," she said. "They really do take you out of your own realm for the period of time that you're in there. You're in a different country and a different sensibility."