Chicago — Tyler Blunier had a choice. He could go to the Chicago museum that's home to the largest, most complete Tyrannosaurus rex skeleton ever discovered. Or he could see an exhibit with modern-day behemoths.

Truth be told, the T. rex didn't stand a chance.

"Who cares about dinosaurs? I want to go to a museum that gives a kid MONSTER TRUCKS!" the 9-year-old boy shouted over the sound of revving engines at "Monster Trucks: The Science of Extreme Machines" at Chicago's Museum of Science and Industry.

Such exhibits follow a trend that began years ago with exhibits tied to such science-oriented hits as "Star Trek" and "Jurassic Park." Now displays that draw upon themes in popular culture are becoming the norm for museums that want to attract new audiences, especially children.

It seems to be working.

Zack Wascher, a 4-year-old from suburban Downers Grove, saw a newspaper ad with photos of the "Monster Trucks" exhibit and asked to come. It was the first time he'd been to the museum, said his father, Jeff.

"My boys, this is their passion," Jeff Wascher said, smiling as he scooped up his 2-year-old son, Max, to keep him from climbing onto one of the trucks.

Like most of today's science museum exhibits, this one is hands on. Among other things, visitors can sit in the driver's seat of a truck called the Grave Digger. They can grab a steering wheel and pretend they're driving while watching a video.

And they can sit and hold a spinning bike wheel that, in turn, causes their chair to twirl around -- a lesson on how centrifugal force affects the trucks. 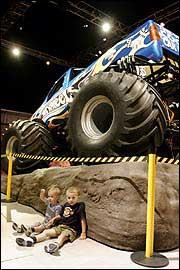 Four-year-old Zack Wascher, right, and his brother Max, 2, pose as their father, not shown, takes a picture of them at the "Monster Trucks: The Science of Extreme Machines" exhibit at the Museum of Science and Industry in Chicago. Friday's exhibit is one of a growing number aimed at drawing in new audiences, especially young people, by drawing upon themes in popular culture.

"When you went to a museum, you used to say, 'It's like you're in church, so you better be quiet,"' said Stephen Asma, a professor at Columbia College in Chicago, who authored the book "Stuffed Animals and Pickled Heads: The Culture and Evolution of Natural History Museums."

But he says officials at the most successful museums are learning to take their displays a little less seriously -- and would do well to freshen up some of their permanent exhibits, too.

Asma, who studied museums in Europe, New York and Chicago for his book, noted that New York's Guggenheim and later Chicago's Field Museum took the idea of incorporating pop culture to new levels with "The Art of the Motorcycle." The exhibit, which featured various generations of motor bikes, debuted in 1998.

This summer, the American Museum of Natural History in New York has "Chocolate: The Exhibition," complete with a chocolate gift shop and special weekend tastings.

Toledo's COSI science museum is the latest stop for "Grossology," an exhibit for children about every bodily excretion you can think of -- and the noises that go with them.

MOSI, the science museum in Tampa, Fla., hosts "Yu-Gi-Oh!" tournaments, allowing young visitors to play with and trade cards from the popular Japanese cartoon series. Museum officials say the tournament offers children the chance to work on their problem-solving and math skills.

And there is one historic event that still has a lot of modern-day appeal: the sinking of the Titanic. Due in part to renewed interest sparked by the 1997 movie, the ill-fated ship now has two traveling exhibits dedicated to it.

There is "Titanic: The Artifact Exhibit," which has traveled from museums in London and Paris to current showings at both the California Science Center in Los Angeles and the Detroit Science Center. And the Children's Museum of Indianapolis is currently housing "Titanic Science," a traveling exhibit developed by the Maryland Science Center.

"We're trying to use a link to pop culture to show that science is everywhere," said Christopher Cropper, senior director of marketing at the Baltimore-based center.

"It makes you see it in a whole different light -- makes you appreciate it a little more," Gill said.