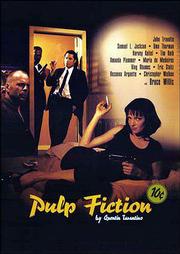 Although the line comes during a lengthy discussion about whether he would eat a dog or a pig, the sentiment just as easily could apply to the movie itself.

The 1994 oddball blockbuster from filmmaker Quentin Tarantino earned more than $100 million at the box office, nabbed an Academy Award and ushered in the independent studio revolution in Hollywood.

It also helped one Lawrence theater achieve its greatest success.

"It's the best-performing film we ever had, so that made us think that we should really bring back 'Pulp Fiction,'" says Liberty Hall Cinemas owner Darren Fox.

"People just loved watching it here. The idea really popped into our heads when 'My Big Fat Greek Wedding' was doing so well."

But considering that the picture has been out on video for years and recently was repackaged in a new DVD collector's edition, is there any compelling reason for fans to pay to see a movie they've sat through dozens of times in the comfort of their living rooms?

"The big-screen experience," Fox replies. "There's nothing better than somebody pointing a gun at you when the barrel is as big as your face. You can't get that at home."

Fox has owned Liberty Hall Cinemas for the past two years, so he never actually attended a showing of "Pulp Fiction" in Lawrence.

"I originally saw it in Kansas City," he says. "I remember my girlfriend made me miss the first five minutes of it because she was perpetually late, and we had to sit on the front row so my neck was strained."

Since then, Fox estimates he's seen it several times.

"I haven't watched it as many times as 'Reservoir Dogs,'" he says of Tarantino's breakthrough effort. "But all the way through, I'd say 15 times. But I've never walked away if I come in halfway when it's on TV."

The theater will bolster the weekend-only screenings with some interesting promotions. Discounts will be given to people who dress up as their favorite Tarantino film character.

"This can be anything by Tarantino, even if his face was just in it," he explains. "Like that really bad movie he did where he was some kind of angel ('Destiny Turns on the Radio') -- you can actually do that one if you want, even though nobody saw it."

Prizes will be awarded for best costume. Fox says first prize is likely to be $100 in Liberty Hall gift certificates.

For his own choice of attire, he will be going as the perpetually bleeding Mr. Orange from "Reservoir Dogs."

Fox believes few films from a decade ago would draw much of an audience if released theatrically now. But Tarantino's magnum opus has proven that personality DOES go a long way.

"What 'Pulp Fiction' has taught us is that really good movies can still be made -- movies that last forever that you can see 1,000 times," he says. "They don't happen very often. And Tarantino definitely won't do it again. Did you see 'Jackie Brown?' That was a horrible film. It's one of the only movies I've ever fallen asleep during."