American Indian artists reflect on legacy of Lewis and Clark

In the artist's note next to the piece, he explains: "'Peace, Peese, Sinew' is not a representation of hanging white people, as someone asked me."

The figures depict departing spirits -- the Earth, the free-flowing Columbia River, salmon, deer, roots, berries and the Indian people themselves -- and an exodus of the life-guiding soul.

Miller, who is Yakama and Nez Perce, is one of 13 Columbia River tribal artists whose works are being shown in "Reflecting on Lewis and Clark -- Contemporary American Indian Viewpoints" through Nov. 15.

The 1805 passage of Meriwether Lewis and William Clark through the Columbia River Gorge on their way to the Pacific Ocean brought with it the beginning of a series of dramatic and devastating changes for the people who had lived here relatively undisturbed by outsiders for centuries.

And yet little of the exhibition's art is overtly angry.

The messages are more subtle, like Pat Courtney Gold's woven storage baskets that tell stories of life on the river. They are decorated with small images such as sturgeon, including one with a deformed fin she calls a Hanford nuclear reservation sturgeon.

"That's not the message we wanted to bring across. Certainly there are other American Indian people who are angry about Lewis and Clark coming across America. I think rather than be angry, we need to talk about this history so we can be at peace and everybody else can learn something." 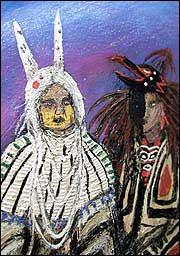 The works are new, but many of the influences are traditional, and some show the integration of modern life with the old ways.

Chuck Williams, a Cascade-Grand Ronde, offered a 1995 color photograph called "Mickey Goes to the Rez," of a young Indian boy, decked out for a powwow, wearing a beaded chest piece of Mickey Mouse.

A delicate piece in wood, foil and ceramic by artist Lillian Pitt, a Wasco-Wishxam, shows tiny salmon drying on a wood rack. She titled it "When There Were Many Salmon."

"For over 10,000 years, native people lived in the N'Chewana area in harmony with the natural world," Pitt wrote about the piece. "To this day, the sacredness of all things, animate and inanimate, continues to keep us going."

The exhibition, which opened July 13 to a packed house, was three years in the making. With most public art -- particularly paintings -- about Lewis and Clark focusing on the European or white perspective, the museum's Lee Musgrave suggested offering a different point of view.

"To my knowledge, we're the only institution to do that," he said.

The museum sits on a bluff in the Gorge, just upriver from what was long ago a huge trading center that drew tribes from across the Northwest. The expedition passed through the area in October 1805 and again in April 1806.

Some of the artists had to research the subject before contributing something for the exhibition.

"A lot of Indian people, in general, are not that interested in Lewis and Clark," said Gold, a Wasco-Tlingit, who lives in Scappoose, Ore., and is the exhibition curator.

Miller said he had fun naming "Peace, Peese, Sinew" -- one of two works he has on display -- from a story in the book "Noon Nee-Me-Poo," which means "We, the Nez Perce," by tribal historian Allen Slickpoo.

Peese is the Nez Perce word for sinew. A tribal elder heard those words and said, "If they want peese, give them peese." So, the Nez Perce gave them sinew, Miller said.

Apolonia Susana Santos, a Tygh-Yakama, has created a large oil-on-canvas diptych, honoring ancestral mothers, and showing women in traditional clothing from many of the tribes Lewis and Clark would have met on their journey West.

"Today, native peoples still mourn the 511-year history of foreign colonization that includes the Lewis and Clark expedition because they have often stood witness to the loss of their land, life and social freedoms," she wrote.

Gold sees many of the works as a testament to physical and spiritual endurance, a way of saying, "We're still here."

Miller said the exhibition is a means for people to get to know their native neighbors.

"Reflecting on Lewis and Clark" is not scheduled to travel. However, discussions are under way to take the show to Tacoma, Wash., and Warm Springs, Ore.