The award is presented by Potpourri, a literary arts magazine.

Rogers won $500 and publication on Potpourri's Web site, www.potpourri.org in the fall issue of the magazine.

Rogers is an educator at the Juvenile Detention Center in Lawrence. She began writing poetry seriously about six years ago when her five children were "out on their own." Her work has been published in Coal City Review. This is her first major award.

Final selection of the winning poem was made from blind submissions by Anne Paolucci, award-winning poet, playwright and president of the Council on National Literatures, an educational foundation based in Middle Village, N.Y.

In its first five years, E.M.U. Theatre (with no permanent rehearsal or performance space and staffed entirely by volunteers) has produced works by more than 30 Kansas authors, as well as plays by Lee Blessing, Sam Shepard, the Futurists and David Mamet. This event marks E.M.U.'s 18th production and will showcase two plays previously produced in Lawrence by E.M.U.

"Oleanna" will include the original artistic team and cast from its May 2002 production with Erin Jones directing. "Endgame" was first performed by E.M.U. last May. James Benkard will direct. 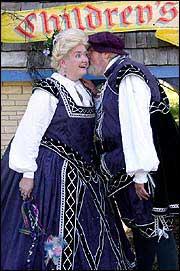 The Duke of York leans in to tell the Duchess a secret at the Kansas City Renaissance Festival. The annual event begins next weekend.

Bonner Springs -- The Kansas City Renaissance Festival opens its 27th season next weekend in a wooded area in the Bonner Springs countryside.

Each year the festival takes visitors back to the 16th century with food, drink, fashion, jousting, games, music and pageantry.

Each of the seven weekends has a theme; here's a look at the lineup: