Recent knee surgery has forced Jessie to miss the approaching racing season. Restless after months of inactivity, she agrees to work at the Iditarod booth at the state fair, taking along her lead sled dog, Tank.

Running with a sled or not, Jessie and Tank are usually together (she raised him from a puppy), and working at the fair is a pleasant experience. Then the body of a small-time thief and hoodlum is discovered, an ax deeply embedded in the back of his skull.

"Well, it's none of my business this time," Jessie tells herself. But in quick order, Tank disappears, possibly in connection with the murder, and Jessie begins a frantic search for her beloved companion.

Then, to the horror of her friends, Jessie vanishes.

Henry does an excellent job of building suspense. Then she sets hearts racing with nail-biting scenes involving Jessie and Tank, who are trapped in a ramshackle cabin, far from anything familiar.

The story is told in a series of flashbacks as Jessie's friends recall events during a gathering at her cabin. Joining the familiar characters are two new faces: 10-year-old Danny Tabor and 82-year-old Frank Monroe, who make an unlikely, but charming, team in the murder investigation.

Readers of this long-running series -- "Death Trap" is the 10th installment -- will be happy with a pleasant development in Jessie's personal life, which it is hoped will be detailed in the next Jessie Arnold mystery. 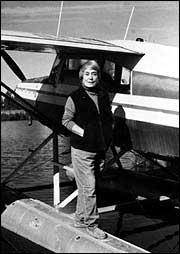 Sue Henry is the author of "Death Trap," published by William Morrow.