St. Louis — The pair who made the inspirational sports films "Hoosiers" and "Rudy" are at it again.

Director David Anspaugh and writer-producer Angelo Pizzo are making "The Game of Their Lives," about the 1950 U.S. World Cup team, which upset England 1-0.

That tournament in Brazil was the last World Cup appearance for the Americans until 1990, and still is considered by many to be the greatest in the history of U.S. soccer.

The movie, slated for release next year, focuses on five players in the starting lineup from St. Louis, among them Harry Keough and Frank Borghi.

Actor Zachery Ty Bryan -- who plays Keough in the film -- said the movie had given him a greater appreciation for what athletes had to do in 1950 to reach World Cup play.

"The game wasn't part of our culture like it was in other countries," Bryan said.

The original players and their families hope the movie will help others realize just what it was like for the U.S. World Cup players.

"These guys came home to no fanfare 50 years ago," said Borghi's daughter, Bette. "And who would have thought this would happen 50 years later? It's kind of like divine justice." 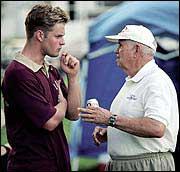 American soccer team player Harry Keough, 75, gives pointers to actor Zachery Ty Bryan, left, in this July 10 file photo, during the shooting of the movie "The Game of Their Lives" in St. Louis. Bryan plays the part of Keough as a member of the 1950 soccer team. The movie focuses heavily on a group of five players in the starting lineup from St. Louis.