Portland, Ore. — The guy wandering around outside the tiki bar on the north edge of town can't even pay for a clue, he's so lost.

"Does anybody know the area?" he asks.

Lucky for him, he runs into Chuck Palahniuk and asks for directions. Nobody knows the area better than Palahniuk, author of the cult classic "Fight Club." And Palahniuk has written a new book to prove it.

"Fugitives and Refugees: A Walk in Portland, Oregon" is stuffed with juxtapositions and secrets. You can crack open the book to Chamber of Commerce sound bites, turn a page or two and find detailed descriptions of Portland's apparently thriving, wildly kinky underground sex industry.

"The idea was to present the banal next to the spectacular," Palahniuk says over coffee at the Alibi, the 1950s-inspired Polynesian paradise that leads off the book's list of recommended eateries in town. "I think that makes each one a little more special."

Interspersed throughout the book are snapshots of Palahniuk's two decades in Portland: crashing a party at the city's June Rose Festival; high on LSD at age 19; catching a Pink Floyd laser light show at the Oregon Museum of Science and Industry.

The stars of the book, though, are the fugitives and refugees who have flocked to one of the West Coast's loosest, hippest cities through the years, eccentrics all. Palahniuk (pronounced PAULA-nik) loves every one of them.

"If I didn't love them, why bother portraying them?" he says. "There are reasons why I am so charmed by them, and I wanted to reinvent that."

So we meet Francis Gabe, an 87-year-old who lives alone in the "world-famous Self-Cleaning House," in a Portland suburb. 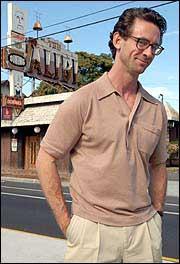 "To clean the house, you just turn on the water to a spinning spray head in the center of each room's ceiling," Palahniuk writes. "The wash and rinse water runs down the sloped floor and out through the fireplace. You turn on the heat and blower to dry everything."

Then there's the couple who founded the local ghost-hunters group, who say Portland is especially receptive to ghosts because of "something organic, possibly the soil, that allows spirits to manifest there more easily."

Palahniuk did not begin writing books until he reached his 30s and realized he needed "to develop something other than party-going skills." He was born in Washington state and went to college at the University of Oregon. After graduating, he worked as a reporter at a small-town newspaper, making about $5 an hour, and lasted six months. He became a diesel mechanic for a trucking company before finally turning to writing.

Palahniuk wrote "Fight Club," an extraordinarily dark, funny novel about an underground world of male aggression, after publishers rejected his first manuscript as too risky. He figured "Fight Club" wouldn't get a second look. Instead, it sold more than 200,000 copies according to Jerry Howard, Palahniuk's editor at Doubleday. And it was made into a film starring Brad Pitt and Edward Norton.

His other works include "Survivor," a memoir of a "death cult" member dictated from a plane as it's about to crash; "Choke," which features a sex addict who mimes choking in restaurants to get out of paying his tab; and "Lullaby," about a reporter pitted against a deadly African chant.

Doubleday will publish his new book, "Diary," Tuesday. It is the story of an art student and her comatose husband who live on a sinister resort island.

Palahniuk wrote "Fugitives and Refugees," published by Crown Journeys, in just a few months, because he wanted the chance to ramble around Portland, his adopted hometown, and fix the place in his mind before the city becomes totally lost to gentrification.

It's already hard to find a good dive bar downtown, he says, and the Cacophony Society couldn't find a single condemned building to break into as a site for its annual potluck supper.

Ah yes, the Cacophony Society. Palahniuk describes the society as a ragtag bunch of people with the most ordinary of jobs, who periodically pull the most extraordinary of pranks. The group is featured prominently in the book, with a loving description of the annual "Santa Rampage," during which benevolently drunken Santas storm downtown streets, bawling out carols and tossing back cocktails.

Of course, the first rule of membership in any secret society is that you don't dish the dirt about it. At a recent book reading in Seattle, a group of out-of-season Santas stormed the room, chanting, "You don't talk about Santa," and forced Palahniuk to put on a Santa suit and chug back a flask of tequila as penance for his sins.

Palahniuk says he knows that telling anyone who can pay $16 at Barnes and Noble about the Cacophony Society does dilute the myth.

"That is always the tragedy," he said. "But the alternative is not to acknowledge these fantastic things. That's more of a tragedy -- maybe the Santa Rampage is destroyed, but knowing that it is out there might encourage the spin-off of other forms."

Besides, Palahniuk says, he kept some of Portland's secrets, like the story of the hospital that for years was the nation's premier clinic for sex-change operations. He couldn't bear the thought of tourists gawking at it, he said.

And there are some quintessentially Portland people and places in the book, like the woman who will teach your dog to dance to the strains of "I Fought the Law (and the Law won)," or the garden growing entirely from recycled materials, which Palahniuk terms, "the closest thing we have to a humane society for plants."

In the end, the book, which has sold about 36,000 copies so far, is a twisted Valentine to Portland, a celebration of a slacker culture in which, Palahniuk says, "It's OK to work a cruddy job as long as you maintain the world's largest collage of Elvis pictures.