Patterns in wondering and knowing

Looking at a Heather Smith Jones painting is a bit like stepping into a dream.

But there's more to Jones' paintings than daydreaming.

Jones, who graduated from Kansas University in 2001 with a master of fine arts in painting, uses oil, egg tempura, acrylic and encaustic on wood and paper to explore memory and the relationship between certainty and uncertainty.

Her explorations are on view through Oct. 18 at Signs of Life, 722 Mass., in an exhibit she calls "Patterns in Wondering and Knowing."

"It talks about the different fluctuations I feel, how those fluctuations happen in a pattern," she explains. "One day I'll feel really certain about things, and I'll feel secure in my understanding of how everything is playing out in my life. Then there's other days where that turns into uncertainty and worry."

Jones represents this and other dichotomies by using realistic images and abstraction within a single painting. Her most recent work, created during a two-week stint as artist in residence at the Hall Farm Center for Arts and Education in Townshend, Vt., clearly juxtaposes opposites. In "Pathways by a moss covered rock," for example, she sets a detailed pencil drawing of a wooded Vermont landscape against a moss-tinted layering of paint with string-like lines swimming through it.

Works by Lawrence artist Heather Smith Jones are on exhibit at Signs of Life gallery, 722 Mass., through Oct. 18. Jones is shown with two of her pieces "One + One = Multitudes", left, and "Pouring Over Transients." Jones explores memory, faith and patterns of wondering and knowing in her work.

"The lines in the abstract represent the pathways we follow in the course of our lives," she writes in the exhibition notes.

The line motif, created by dipping string in paint and "printing" onto the surface, shows up in much of Jones' work. Clouds also recur often, and they don't represent the ephemeral, as one might assume.

Faith plays into the dichotomy of certainty and uncertainty, Jones says, because "it can keep you grounded, keep you moving forward."

Some of the other images that appear in Jones' work come from personal experiences and memories from the tangible world. One of the buildings in her five-work "Patterns in Wondering and Knowing" series, for example, is based on a childhood home.

Jones says realizing a few years ago that her grandmother was starting to forget first inspired her interest in memory. 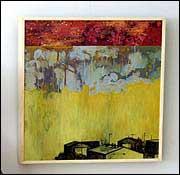 "Pouring Over Transients" is on view at Signs of Life, 722 Mass., as part of an exhibit of paintings by Lawrence artist Heather Smith Jones.

"Shortly before it (her grandmother's memory) was completely gone, I was able to get a maternal family tree from her. I realized if we hadn't gotten that from her a few years ago, no one in our family would have that," Jones says. "Memories and thoughts and experiences are so fleeting, and if you don't record them somewhere, they're gone.

"And it's not always the large things that are really important. I think when I work on my paintings, I think of things in terms of pieces and pulling together small pieces into something cohesive."

'Nothing else I would ever want to do'

Jones has been inspired by abstract expressionism, on the one hand, and representationalists like Vermeer on the other.

"There's actually more that I don't like in the world of painting than there is that I do like, so I think that influences me as much as anything," she says. "When I'm looking at any specific artist's work, what I may get from it is a specific texture or a specific color combination or a specific type of line."

Jones grew up in a creative family. Her father is a potter, her mother a weaver, and the two run an art gallery in Jones' native South Carolina.

When her high school classmates were getting early release, she stayed behind, filling her afternoons with three to four hours of art classes.

"I loved color, and I discovered that I loved the different tactile qualities and the different kinds of paint," she says. "So it was just a good fit, and I never thought otherwise. There's nothing else I would ever want to do."

Jones helps supplement her living as an artist by substitute teaching in Lawrence public schools.

Though her paintings originate from a very personal place, she hopes they have universal appeal.