Photographer finds beauty in the homeless

Cleveland — Four-year-old Aaron Dudley is on a sofa, mugging for the camera with a playful grin and twisted face, tiny biceps bulging in outstretched arms folded into a muscleman pose.

Hanging next to his photo is a close-up of his 10-year-old sister, Quartney Leonard. She's not smiling, her chubby cheeks are framed by a cascade of coal-black curls and her sad, dark brown eyes are a sign that the siblings aren't typical children.

Aaron and Quartney were homeless when Cleveland photographer David Hagen invited them, their brother and mother into his studio for a daylong photo shoot. There they found professional lighting, cozy sets and the respect usually reserved for fashion models.

At the hours-long shoots, Hagen provided breakfast, music and conversation. He photographed the subjects using professional lighting but in their own clothing and without professional hair or makeup.

Hagen, a commercial photographer, worked with advocacy groups to select subjects from Cuyahoga County's 26,000 homeless. His portraits have been compiled into a book, "Face to Face," that he hopes will break stereotypes and move people to help.

He photographed 34 people, many of whom appear in the 12-page booklet that was provided for free to those who visited a recent exhibit of Hagen's work at Creative Impetus Gallery. The show will travel to Cleveland area churches and organizers hope to take it to other cities in and out of the state.

Hagen and the Northeast Ohio Coalition for the Homeless, which helped print the book, hope people who see the pictures will donate time or money.

"I wanted to photograph the homeless population in a way that might make them look like you, your father, mother, brother, sister, friend or neighbor," Hagen said.

Cleveland photographer David Hagen poses with two of his portraits in Cleveland. Hagen had an exhibition of portraits of homeless people at the Creative Impetus Gallery in Cleveland, compiled into his book "Face to Face: Portraits of Homeless People in Cleveland."

There are no grainy photographs of dirty men pushing a shopping cart full of tin cans down a big city street or panhandlers begging for change. Instead, there are black-and-white and color portraits like that of a denim overall-clad Twila Felder, wearing a giant smile.

"Look at all that joy just busting out of me," Felder said as she proudly showed off the picture next to a more serious one.

They were taken two years ago, just before Felder says she sought help for crack and alcohol addiction that caused her to lose her home.

"When I saw both of these pictures, I knew what I had to do. I had to go through the storm to reach sunshine," the 38-year-old Felder said.

"My whole life has changed. Just seeing the two different mes helped me."

Koula Lazar, owner of the home decor store Something Different, a few blocks from the gallery, said she was happy the project had inspired some. But she warned against it painting a too-rosy picture of homelessness.

"We see the negative end on this street," Lazar said. "When there's somebody outside panhandling, I say, 'You know sir, keep moving. Don't panhandle my customers."'

John Wilbur, executive director of neighborhood group Ohio City Near West, said the project had not been as controversial as other homeless issues, such as where to put shelters.

Brian Davis, executive director of the homeless coalition, said that was the goal. 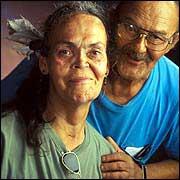 Reignbeaux, left, and Robert, pose in an undated portrait taken by Cleveland photographer David Hagen. For two years, Hagen ushered homeless people off the street and into his studio, where he photographed them in warm light and treated them like supermodels. The portraits are in a new book he says brings awareness to homelessness.

"I hope it returns some of the humanity to some of the problems," Davis said. "Just looking at the work, you get a lot better sense of their individuality. You see their personalities. You don't get to see the beauty that some of these photographs bring out."

In the tiny gallery, Hagen's shots grace the walls and some hang by wire from the ceiling. There are children, families, middle-aged men and elderly women. Their faces are black and white; some wear scars and others show deep lines. All of them glow in warm studio light.

He became involved with the project when a friend picked up wedding portraits Hagen had shot. An advocate, she was sad about losing a grant for a planned calendar featuring Cleveland-area homeless people.

There was a personal connection for Hagen: His brother was homeless for a time in Florida. So Hagen offered his camera and his time.

"Gloria was the first one. She came in with a chip on her shoulder, and she was bitter," Hagen recalls. "She said, 'What gives you the right to make money off of homeless people?"'

He won her over when he explained that he was volunteering his time to show the homeless in a new light. Gloria spread the word to her friends, many who came to be photographed.

The art gallery where the photographs were on view through the end of July is owned by Marina Marquez-Zenkov, 29, a Cleveland native who was homeless as a child.

"It hit home for me," she said. "David really captured the essence of the people, that they are people."