This is arguably the best fighting game to date.

Today, souls will burn for this game all over the U.S. It's finally here, so rush to your nearest video game retailer and get your copy before they're gone. 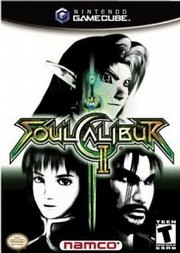 Best of the bunch.

The follow up to the most critically acclaimed fighter is here and it is a true sequel in every way. For the casual gamer, it's easy to pick up and button mash. For the fighting snob, it boasts deeper gameplay than the previous SC, and more than Tekken, Dead or Alive and even Virtua Fighter.

Many fighters return, including Mitsurugi and Ivy, among new souls such as Todd MacFarlane's Necrid and a Devil May Cry-ish Dante look-alike named Raphael. Each of the console versions has a character unique to its version. The PS2 has Heihachi from Tekken. The Xbox has Spawn. And the Gamecube has Link. Namco stated that Link would be the biggest draw, as shown by Link's more featured appearance on the Gamecube cover as opposed to the other characters on their respective console cover.

The best console-specific character, aside from my love of the Zelda series, is Link simply because his ancient renaissance-esque aura fits perfectly with the sweeping theme and landscapes of the Soul series. I suppose Spawn fits in with the thug-esque of Nightmare and Astaroth, but it's evident that Heihachi from Tekken seems completely out of place, especially given that he has no weapon to use, which is a main characteristic of Soul Calibur fighting. This is a weird choice anyway, especially considering Namco made Tekken.

But regardless, the fighting is pure brilliance and renders all other serious fighters archaic.

Each character has over 130 moves including at least five different throws, numerous parries, counters and defense-as-offense maneuvers. You have your normal vertical slash, horizontal slash, kick and block buttons as usual. When you first pick up the controller, you will realize that the returning characters' main moves are pulled off the same way. Some may be quick to judge that it's more like Soul Calibur 1.5 than a true sequel. Not so. Once you start playing for hours and hours, you will realize how much smoother the animations are, how much deeper the fighting systems gets, and how cool the Weapon Master Mode is.

In the new weapon master mode, there are a few hundred challenges to complete. Once you complete a certain mission, you are awarded one of ten to twelve new weapons you can equip in all different modes. Although the new weapons react the same, they are awesome to look at and are rewarding to achieve.

The graphics are truly amazing. The backgrounds are highly detailed to a photographic nature. The landscapes are awe-inspiring, especially in widescreen. The fighters are flawlessly animated in a solid 60 frames per second. The PS2 version does suffer from slowdown occasionally like the import version did, but not much. All versions run in widescreen and progressive scan output 480p. However, the Xbox version will support a true HD 720p as well, but will display the jaggies (jagged edges due to minor pixelization {you can see little squares}) a little more.

The cheesy announcer returns, but is welcomed. The sound effects are crisp and brilliant, making a perfect complement to the splendid animations that evoke some "aawwwww snap" from the urban kids when a hard hit is made. The music is even more brilliant. Real orchestra and creative melodies drive home the scope of the landscapes and the epic battles.

Those of you that have waited for the American version will be happy to know that you get more goodies including Lizardman and Hwang playable in the game.

If there was one drawback to be named, it would be the endings. It's just text over art like the first Soul Calibur. No CGI or real-time action. Bummer...sort of.

Whether you're a casual or snob fighting fan, Soul Calibur 2 will be the most fun you've ever had playing a fighting game.