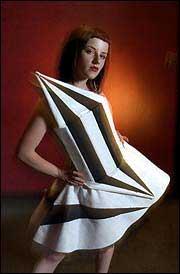 On a freezing night last February, 500 people scurried to Raoul's Velvet Room to see "Detour: A Fashion Show." Unfortunately, only 250 of them fit in the club.

"People that didn't get in were pressed against the window watching," said Ashlee Hall, a producer of the event. "It made us realize we needed to do another in a bigger, better place."

The bigger, better fashion show will become a reality Sept. 5 when "Daydream: A Fashion Performance" hits Liberty Hall. The event will showcase the wearable art of 10 local designers with help from more than 30 models and music from DJ Bill Pile.

"Daydream" will be as ambitious in concept as it is in scope. Rather than rely upon the catwalk format of "Detour," the show will present nine collections in a theatrical show based upon the sequence of a day. Thus, the "Morning Wear" collection opens the show and the "Dream Wear" collection closes it.

"We didn't want to use the same formula," Hall said. "If we're going to say it's going to be bigger and better then we need to make sure it really is."

Re:forming
Hall and co-fashionistas Sarah Stiefel and Amanda Luginbill are the brains behind re:form, a fashion show production company. The trio brainstormed the idea for re:form after attending fashion shows in Kansas City and wanting to offer Lawrence designers a similar platform.

"We had so many talented and creative friends with no place to show their designs," Hall said. "We wanted to use the connections we had to blow people's minds."

Following the success of "Detour," Massachusetts Street retailer Hobbs Inc. commissioned the trio to organize "Hullabaloo," a street show that highlighted Diesel-brand clothing. The show featured music and models on two stages outside the store.

"They knew exactly what they wanted, and they pulled it off perfectly," said Jeremy Cain, a Hobbs employee. "It definitely brought people into the store."

For "Daydream," re:form solicited the participation of seven designers who participated in "Detour" and three new designers. Each designer got an assignment: morning, workout, workday, beach, wedding, cocktail, nightlife, lingerie and "dream wear."

Hall said she assigned collections not to restrict creativity but to provide a framework for designers to express their own styles.

"Everything is going to be very interpretive," she said. "None of the wedding dresses will be white."

Designing women
The designers, all of whom are female, range from fashion-industry hopefuls to yoga instructors to overproductive hobbyists. Each will present eight or more outfits.

Taylor Triano, a fine arts student at Kansas University who will present the wedding collection, hopes to use the experience as a boost to get into the Fashion Institute of Technology in New York.

"I'm afraid I'm going to jinx it, so I'm trying not to talk about it too seriously," Triano said. "I spent my summer locked in a room with a sewing machine."

Triano characterizes most of her pieces as abstract. One from the "Detour" show featured a corset with a painted-on fetus.

"I try to make people feel more outgoing with their fashion," she said. "You'd have to be pretty daring to wear most of my pieces."

Loni Hosking, manager of Waxman Candles, used Mylar, burlap, beads and magazine pages to fashion her bikini collection for the show. Hosking said the show gave her an opportunity to try out a new medium and showcase her designs for a new audience. 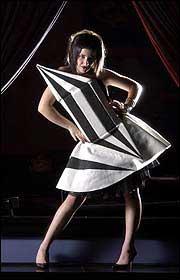 Fashion Designer Taylor Triano models a dress of her own design. The garment will be part of "Daydream," a fashion performance set for 8:30 p.m. Sept. 5 at Liberty Hall. Lawrence fashionistas Ashlee Hall, Sarah Stiefel and Amanda Luginbill of re:form, a fashion show production company, say the show will offer a sampling of "underground" fashions.

"It's better than a gallery show because you get such a huge turnout," Hosking said. "You never know what kind of contacts you'll make or networking you'll do."

Material girls
More than 30 models will volunteer their bodies and time to make the show happen. Hall imposed a limit on the number of models each designer could employ after more than 70 turned "Detour" into a practical nightmare.

"We're trying to learn from our mistakes," Hall said. "This time we actually have a backstage, so that will help."

Most of the models do not have previous modeling experience. One exception is Joni Harbeck, who walked runways for modeling agencies in Milan and New York.

"It's a lot more fun because it's an underground type of show versus a hyped-up, high-pressure situation," Harbeck said. "You'll have sheer dresses back-to-back with biker bitches in black leather back-to-back with somebody who makes bras out of teddy bears."

Model Julia Shnyra said the most difficult part of the show was preparing to get on stage.

"Once you step out, the nerves fade away and you start having fun," she said. "We're all very happy when the show is done."

One of the most confident performers at the Detour show may have been 12-year-old Copper Ramberg, who will model with her mother Laura in the "Daydream" show. 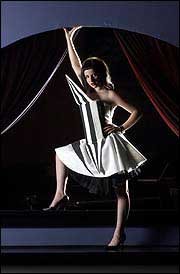 "I think for Copper it's about confidence," Laura said. "She seems to be full of it, which makes me very happy."

Dream on
"Daydream" may be the last Lawrence-based production for Hall, who will move to New York in September. If the show goes well, she might have a little extra moving cash.

"The buzz and the reaction around town are satisfying, but I don't think we'd be as enthusiastic about it if we didn't know we were going to walk away making a little bit," Hall said.

The models, designers and producers will convene for a Tuesday rehearsal. During the week, Hall and Stiefel will be doing last-minute promotions, going through checklists with designers and meeting with local businesses that will be sponsoring the show.

"It's getting close to the time where we just have to sit back and let everything happen," Hall said. "I still have to decide what I'm going to wear that night." 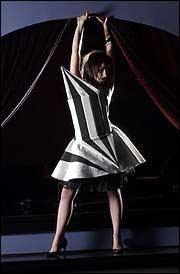